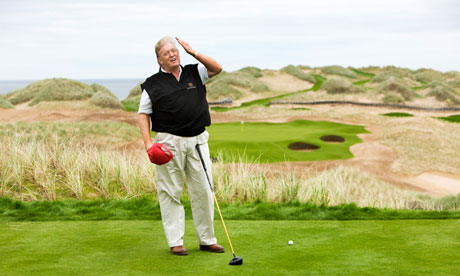 Donald Trump has put his pet birthing issue on hold at least for the moment, taking to Twitter calling those who opposed a golf course development he planned in Scotland as "morons" and chastising an award-winning filmmaker who spotlighted the scheme a "zero talent." OK, go ahead and insert a "You're fired" moment where appropriate…

The Donald posted scathing tweets about Anthony Baxter whose doc You've Been Trumped follows the story of a group of Scottish homeowners who take on the reality star/real estate billionaire who tried to buy up a wilderness area near their homes to develop a golf course.

Fellow filmmaker Bill Forsyth penned an article for The Guardian in which he likened Baxter's doc about the real-life Trump with his fictional account of an American oil company that sends an American to Scotland to buy up a village where they want to build a refinery.

Tit-for-tat followed with Trump spokesperson George Sorial telling the U.K.'s Daily Mail that Forsyth is "nothing more than a misinformed jackass looking for a few headlines on the back of the Trump name."

Forsythe said the doc is "a moving depiction of human survival and dignity amidst murky doings akin to seventies Romania."

You've Been Trumped follows residents next to the $1.2 billion development showing residents' water and electricity being cut off and mounds of earth being piled up next to their homes.

The project ran into logistical hurdles and Trump described the filmmakers, which won prizes on the festival circuit last year, as "morons."

"Your documentary has died many deaths. You have, in my opinion, zero talent," said Trump. "[You] should really be ashamed about his massive box office disaster. Take a hint and get out of the film business, loser. People don’t like false stories."

He also tweeted that the documentary has helped him "promote & make Trump International Golf Links Scotland so successful you stupid fool!" - Ouch!
You've Been Trumped will be broadcasted in the U.K. on BBC2 this weekend, which clearly brought on the flare-up in the British press.

[Sources: The Daily Mail, The Guardian, Photo by Murdo MacLeod ]