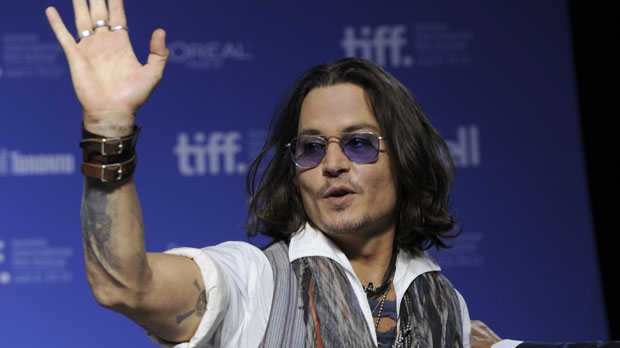 Johnny Depp is getting into the publishing biz. Called Infinitum Nihil, meaning "Nothing is Forever," the same name as his production company. Depp's imprint will be a part of HarperCollins Publishers. The imprint will seek what it calls "authentic, outspoken and visionary ideas and voices." And a Bob Dylan book is the first to usher in Depp's foray into the book world.

The Unraveled Tales of Bob Dylan will "set the record straight" on the legendary songwriter's life and career. It is based in part on interviews with Dylan by best-selling historian Douglas Brinkley, A.P. reports. Brinkley recently wrote a Dylan cover story in Rolling Stone and noted that he and Depp thought the book was perfect for the Infinitum Nihil launch.

"I pledge, on behalf of Infinitum Nihil, that we will do our best to deliver publications worthy of peoples' time, of peoples' concern, publications that might ordinarily never have breached the parapet," Depp said in a statement released by HarperCollins. "For this dream realized, we would like to salute HarperCollins for their faith in us and look forward to a long and fruitful relationship together."

Said Brinkley via a statement: "Bob has been very warm and forthcoming with us. His music has inspired us both deeply since we were teenagers."

The Unraveled Tales of Bob Dylan will be ready in 2015. Dylan and Brinkley are also working together on a previously announced novel by Dylan hero, folk musician Woody Guthrie, who died in 1967. Completed by Guthrie in 1947, the novel, House of Earth was only recently found. It is slated to come out in January.

Depp was a close friend of author Hunter Thompson and starred in film adaptations of his work, Rum Diary and Fear and Loathing in Las Vegas. Depp also narrated the audio version of Keith Richards' memoir Life.