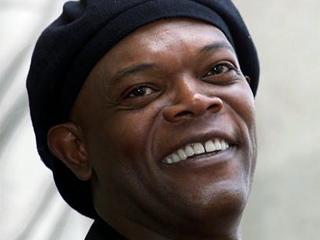 Full disclosure right off the bat here, some die-hard Romney fans and those with hyper-sensitivity to the F-Bomb and haters of politics generally may not want to proceed, so if you do, go at your own peril. A tidy little vid starring Barack supporter-extraordinaire Samuel L. Jackson has hit the internet, and though a tad longer than the typical 30 second political spot flooding the airwaves in this election season, it is quite a bit more clever and funnier - though it helps if you're a supporter of the incumbent, naturally. And while it is unabashedly supportive of Obama, the prez does not come in and say he "supports this message" like in most other political ads. In this version, Jackson invades a home of a quiet suburban family of lackadaisical Obama '08 supporters to tell them to, "Wake the F**** Up."

The three-minute, forty-second video is sponsored by the Jewish Council for Education and Research and is a riff on a reading the Oscar-nominated actor did last year of a satirical "children's book" called Go the F*** to Sleep, a charming little diddy that went viral. The book's author, Adam Mansbach also wrote the script for the pro-Obama version of the story, which opens with a young girl who lies awake in her bed fretting that her complacent family will sleep the election away, when just four years ago they were taking to the streets. The video premiered on Yahoo!

Little Suzie gets out of bed, but not far from sight is her political ally in-waiting with political rhymes and a final "Wake the F*** Up" as she traipses through her house encountering her listless family members.

First off, she goes to her parents who are falling asleep watching TV in the living room. And like an angel, Jackson appears with a riddle urging little Suzie's parents to get involved. Next she heads into her older brother's room, who is sitting with his feet up on his desk. Suzie blasts her brother saying that the election is about their future and recalls how he was on the front lines in '08. Her brother replies that all politicians are "the same" and like magic again, Jackson appears giving a friendly warning that goes something like this:

"They're all the same? Please! Obama's sent SEALS to Bin Laden's place, Romney sent jobs overseas. And how about that student loan overhaul? It's going to save you thousands of bucks. Mitt will cut that sh** in a second. Hey dude, Wake the F*** Up!"

Next she heads to her older sister's room with more prose about planned parenthood etc., Jackson appears, gives his two cents with another riddle and another, "Wake the F*** Up!" And finally, it's off to grandma and grandpa's room who are, incidentally, proving that older folks do have good times, until they're interrupted by you know who… Medicare is the big theme here, naturally, and one more "Wake the F*** Up!"