Jude Law: 'We Want To Do' A Sherlock Holmes 3 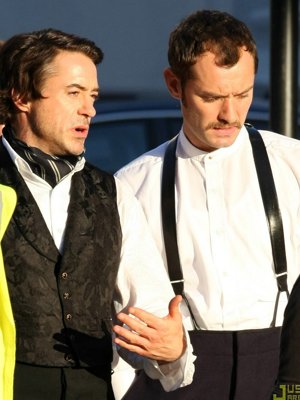 Robert Downey, Jr. is certainly an It boy at the moment after a summer of Avengers (and more on the way) as well as his current project, Iron Man 3. Now it appears that he and Jude Law are ready to take on another installment of Sherlock Holmes, but Law said that while the pair are into the idea of a return to the eccentric British detective saga, "but Downey's a busy boy…"

Theoretically, Warner Bros. would be into a third match-up as well. The first installment in which Downey plays the title character, while Law takes on the role of Dr. John Watson, pulled in a massive $209 million-plus - and that was just in the U.S. The 2011 follow-up (both directed by Guy Ritchie incidentally) still cashed in with an impressive nearly $187 million domestically (and well-over a half-billion dollars worldwide).

So will it happen or not? Jude Law gave some insight, as reported by Metro in the U.K.

"There's certainly talk of it and I know there's a script being played around with, but Downey's a busy boy and I'm a busy boy so we'll see," he said. "But we want to [do another one]. We're a very happy team and we have a lot of fun and we also think there's still a lot of legs in the duo."

Apparently Iron Man 3 writer Drew Pearce was tapped to complete a script for the possible third installment. Law is currently promoting his latest film, Anna Karenina where it debuted last at the Toronto International Film Festival.