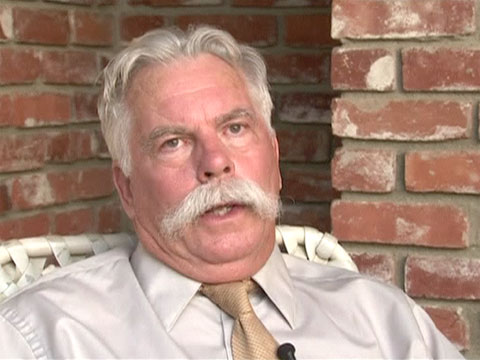 Steve Klein says there's no blood on his hands.

In the aftermath of violence in Libya over the virulently anti-Islam video Innocence of Muslims  initial media reports pointed to a Coptic Christian filmmaker named Sam Bacile, the pseudonym for Egyptian immigrant Nakoula Basseley Nakoula. But according to an A.P. report, Klein, a California insurance agent and Vietnam War veteran, has become the unrepentant public face of the crude video that has resulted in the deaths of four American diplomats, including America's Ambassador to Libya,  J. Christopher Stevens.

Nakoula contacted Klein several months ago asking for his input and advice before creating the video. He also asked the 61 year-old if he would act as a spokesperson if the project somehow succeeded. Now, as rage over the video — and anti-American violence — spreads through the Arab world, Nakoula has gone into hiding, leaving Klein to perform his duties as the brazen American face of the controversy.

According to the A.P. investigation, is an outspoken critic of radical Islam and he's piqued the attention of civil liberties groups including the Southern Poverty Law Center. Klein said he has pursued radical Muslims living in the U.S. since the 9/11 attacks eleven years ago. His son suffered an attack by a suicide bomber in 2007 while serving in Iraq, which encouraged his activities.

[Related: POLL: Should Google Have Blocked Access To Innocence of Muslims In Egypt And Libya?]

While sipping a beer on the front porch of his Hemet, CA home, told the A.P. that he has visited "every mosque in California" and  found "500 to 750 of these people who are future suicide bombers and murderers.

"What do I get out of this? I get to die one of these days hoping my granddaughters and my grandsons will be safe from these monsters," Klein also told the A.P. "Those are the guys I'm looking for. I'm not interested in mom and pop running a pizza store or running a smoky shop, a hookah shop."

Klein, who works as an insurance agent on the second floor of a downtown business complex in Hemet about 90 miles southwest of L.A. founded Courageous Christians United, which holds protests outside abortion clinics, Mormon temples and mosques. He also started Concerned Citizens for the First Amendment, which proselytizes against Muslims and produces anti-Muslim propaganda that Klein distributes. His activities led him to his contact with Nakoula about making Innocence of Muslims.

Apparently, the title was meant as a trick to lure Muslim radicals to view the pic with the intention that after seeing it, they would convert.

The YouTube video is blamed for inciting riots in Egypt and Libya where the U.S. Ambassador Christopher Stevens was killed along with three other American embassy personnel. Angry demonstrations have spread throughout the Muslim world Friday.

"Do I have blood on my hands? No. Did I kill this guy? No," said Klein. "Do I feel guilty that these people were incited? Guess what? I didn't incite them. They're pre-incited, they're pre-programmed to do this."