This week sees the release of Resident Evil: Retribution, the next installment in what has been dubbed the “most successful” of video game movie series, a shallow victory indeed. Considering that contemporary video games have become cinematic, employing many proven Hollywood techniques in their platforms, it means that once those properties are adapted for the screen you could end up with the proverbial serpent eating its own tail. In the case of Doom however you end up with something else; much like a document that has been photocopied from a fax of a forgery taken from a carbon-copy, what you end up with is an indecipherable mess.

But first, let's take a look at the original Resident Evil, itself an exercise in impotent storytelling. How about this for a synopsis: In Raccoon City a company known as The Umbrella Corporation owns a laboratory called The Hive, where a T-virus has been released and The Red Queen computer seals the building and kills the occupants to stop an outbreak. Uh-huh. Guess I won’t look for the words, “Adapted from the novel by Noel Coward.”

The gist of that 2002 film was zombies vs. mercenaries, including Milla Jovovich, who wages battle while wearing a red cocktail dress, of course; this cheesecloth-thin plotline has somehow been stretched into a 5-picture movie arc. Just three years later came the far more shallow bout of movie making that is Doom — basically the same movie, only with Jovovich's sexy freedom fighter replaced by the buff chunk-muscle Dwayne “The Rock” Johnson.

Doom comes the closest to replicating the gaming experience on film. Literally little more than a chase-and-shoot action pic, you can guess exactly how this script was constructed. Imagine for a moment you are building your dream home and want to make sure to include all the elements you deem important. You begin by telling a contractor you want him to construct a fireplace. Upstairs you instruct him to install a Roman bath tub and a closet big enough to park a mini-Cooper, and then you suggest he add a walk-in humidor in the basement. You inspect the plans, and once satisfied that everything looks perfect you then tell him, “I love it! Now you can begin construction on the house.”

The same type of logic is going on here; clearly they included the important elements of the game and later decided it might be cool to also come up with a script. Then decisions were made based on money. The original video games featured demon entities which could be costly to replicate — so in the film they became mutated Martian explorers, mostly filmed in the dark. But wait, how will the soldiers end up on Mars, responding to this outbreak? Before you can utter "screenplay shorthand," a portal is placed in the Nevada desert where the mercenaries can enter and arrive on Mars as quickly as they are needed. Voila!

Amazingly this is all goofier than it sounds, yet told with a straight face, telling us this is as it should be. We start with a hard-opening as scientists run down futuristic corridors, fleeing from something unseen. When they try to get through a closing hatch a female has her arm severed by the door. This is not mindless vivisection, mind you; later The Rock will use the severed limb to gain access via bio-verification locks! Subtle intro in place, roll credits.

The year is 2046, and during the colonization of Mars there has been an experiment where a 24th chromosome has been developed which will grant humans incredible physical gifts and the ability to regenerate quickly from wounds — unless you happen to mutate into a hideous homicidal creature. (There are some glitches, understand.)

The facility is sealed up and a few scientists remain, so a group of Marines are located for the mission. "The Rock" plays Sarge, and he guides a team of clichés named Reaper, Goat, Duke, The Kid, and others. Once there Reaper is reintroduced to his estranged scientist sister who works at the facility, which creates some sibling tension but is also convenient as she can guide the Marines around the joint. 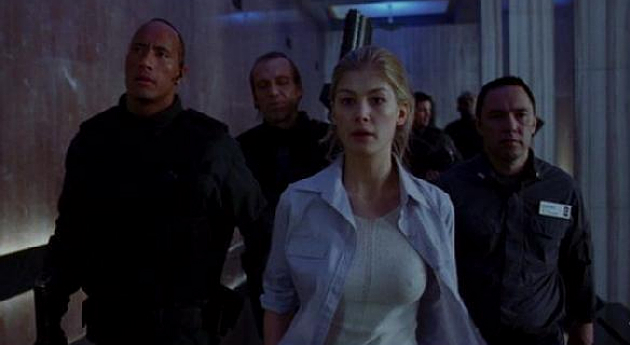 Director Andrezj Bartkowiak (his actual name — I did not nod off and type that with my forehead) uses his skills to hide the less-than-impressive appearance of the creatures. Even though this takes place almost entirely on the Fourth Planet you would never know it, because the whole time is spent in labs and the steam tunnels of the facility with zero exterior shots. It's like watching someone’s vacation movies spent at a beach house and everything takes place in the basement.

What we do see of the creatures is a biological illogicality, since the beings tower over the humans, rather immense in size. Their caloric and protein intake would have to be far greater than the limited food source a couple dozen scientists would provide. (Why not clear everyone out and let them cannibalize to extinction? Because that would leave us with a very short film experience.) 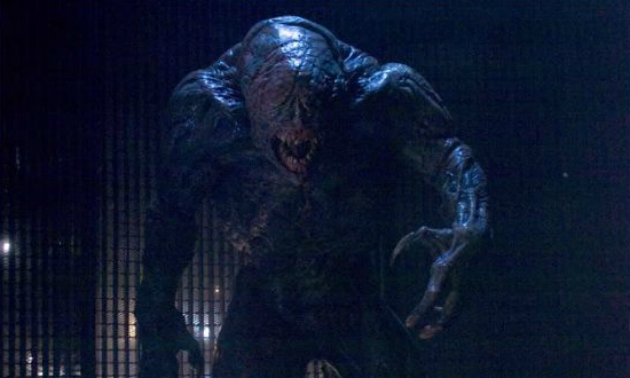 It is far more entertaining to send anonymous soldiers to a grisly end while also vividly destroying some monstrous Martians in gory detail. During this melee Sarge eventually discovers a trademark weapon from the game, the B-F-G (Big F-ing Gun.) This weapon provides plenty of psychological material to analyze; many N.O.W. members opposed to the N.R.A. will tell you the B.F.G. is only a representation of the male organ. To be honest, those ladies have a valid argument — this gun shoots a plasma-like substance, meaning the ammunition is not actually fired as much as it is... ejaculated. You have to be very secure in your masculinity to wield this particular phallic weapon.

As the Marines are systematically dispatched by the zombie goliaths we eventually get treated to the centerpiece scene of the movie where we watch all the action from the POV of star (and future <a href="" target="_blank">Judge Dredd) Karl Urban, with his weapon in view of the camera just like in the game. It's a decent representation filled with flashy camera tricks and computer wizardry, like seeing the game on screen with much better graphic simulators delivering the visuals.

Ultimately there is a visceral feeling to Doom — you want to be in the action, and then you want to partake. With all the viscera flying on screen you'll check your shoes for plasma, and then you’ll check eBay for older gaming systems that will allow you to play a vintage version of Doom. Why let The Rock have all the fun shooting his load?!