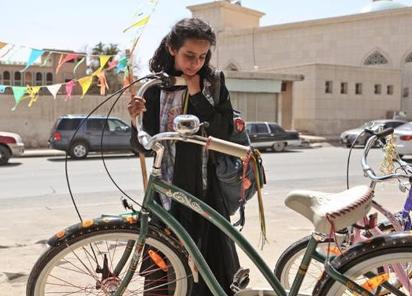 The Master, the latest from Paul Thomas Anderson starring Philip Seymour Hoffman and Joaquin Phoenix, has captured the zeitgeist of Venice Film Festival talk in the first half of the festival, but perhaps more quietly, director Haifaa Al Mansour is making celluloid history with her film Wadjda. Al Mansour is Saudi Arabia's first female director, in a country that forbids movie theaters. The film follows the story of a determined 10 year-old girl living in the country's capital, Riyadh.

Shot entirely in Saudi Arabia, according to the director, the film follows young Wadjda as she lives her life trying to dodge the strict rules of Saudi society both at home and school. According to a profile of the film in Reuters, she is disciplined for not wearing her veil, listening to pop music and not "hiding in front of men." But her sites set on a green bicycle that she decides to raise money to get it. Her plan is to learn Koranic verses and take part in a religious competition at school. If she can raise the money, she will buy the bike. And in the meantime, she will - at least temporarily - show herself as a renewed pious girl.

"It's easy to say it's a difficult, conservative place for a woman and do nothing about it, but we need to push forward and hope we can help make it a more relaxed and tolerant society," she said after her film premiered in Venice, speaking to reporters in English, according to Reuters. She added that the restrictive kingdom has started to open up for women, noting that female athletes traveled to London for the recent Olympics and that its monarch, King Abdullah has opened up better educational opportunities for women and they now can vote in municipal elections.

""It is not like before, although I can't say it's like heaven," she said. "Society won't just accept it, people will put pressure on women to stay home, but we have to fight." Still she did encounter some social-stigma while filming in the country's capital despite having received permission. Locals in some more conservative areas of the city did not like seeing a female filmmaker directing with men on the set and at times used a walkie-talkie in order to give instruction to her male actors.

Wadjda is playing out of competition at the Venice Film Festival.