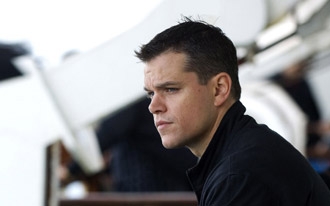 Gus Van Sant's Promised Land Set for Late December Release
Two-time Oscar nominee Gus Van Sant's contemporary drama Promised Land will open in theaters in L.A. and New York December 28th and expand further in January. Starring Rosemarie DeWitt, Oscar nominee Hal Holbrook (Into the Wild), Scoot McNairy (Killing Them Softly), Titus Welliver (The Town), and Academy Award winner Frances McDormand, the film revolves around Steve Butler, a corporate salesman who arrives in a rural town with his sales partner, Sue Thomason. The duo hope to persuade the economically down and out town to go for an offer of drilling rights. But things get complicated when a school teacher objects with support from a grassroots campaign led by another man. The film’s original screenplay was written by John Krasinski and Matt Damon, based on a story by Dave Eggers.

Franck Khalfoun's Thriller Maniac Heading to Theaters
Elijah Woods stars in the remake of William Lustig's 1980 film of the same title. The film revolves around Frank who develops an obsession with a young artist when he decides to help her with an exhibition. But the obsession unleashes a compulsion to stalk and kill a la a 21st century Jack the Ripper. IFC Midnight picked up rights to the Cannes out of competition title for North America.

Mark Gooder Joins The Weinstein Company
Gooder, who served as CEO for Icon Productions for six years, will serve as President of Acquisitions/ Australian Operations. Gooder’s new role involves the day-to-day running of the acquisitions department and leading the charge of bringing in projects for the company, from scripts through finished films. He will also attend major markets and festivals including the upcoming Toronto International Film Festival.

Ang Lee Tops Sony's List for Cleopatra
Columbia Pictures has begun courting the Life of Pi director for its project that will star Angelina Jolie. No formal offer has been made yet, however, THR reports via Vulture.

Mireille Enos Set for David Ayer's Ten
Enos (The Killing) will star in the feature that will star Arnold Schwarzenegger. She will play a member of the elite DEA team and married to co-star Sam Worthington's character, Deadline reports.

Bérénice Bejo To Replace Marion Cotillard In Oscar-Winner's Next Project
Bejo (The Artist) will join Oscar winning director Asghar Farhadi's next untitled project set to begin shooting in October in Paris. She will replace Cotillard due to scheduling conflicts. The storyline is secret but is apparently in the vein of his award-winning A Separation with "an element of suspense," Deadline reports.