Don’t shoot the messenger!  This week's wide release of the Joseph Gordon-Levitt bike courier film Premium Rush inspired Movieline to deliver this cinematic parcel to your doorstep. Once each generation, Hollywood pushes a product centered on the travails of these municipal nomads; back in the 1970s there was a love story with Tom Berenger in Rush It; CBS tried out the courier-based sitcom Double Rush with Robert Pastorelli and David Arquette; Jessica Alba played an urban biker in Dark Angel; and, most recently, came the Chinese import Beijing Bicycle. The desire to portray the world of bike messenger-ing is understandably tempting — the close-knit society, rebellious personalities, and high-risk action of the work beg for a dramatic treatment. But one title rises seat and handlebars above all the others in this micro-sub-genre: 1986's Kevin Bacon vehicle Quicksilver.

Nestled perfectly in the middle of the decade, this film typifies a 1980s offering, so light in actual content you could fit it in your shoulder bag. Characters are revealed less via action than by name – Apache, Cha-Cha, Airborne, Spider, and Shorty. Even the main characters are communion-wafer thin when it comes to complexity. Curiously, Quicksilver features a preponderance of comedians in the cast: Paul Rodriguez has a major part, Saturday Night Live writer Andrew Smith appears, and Louie Anderson is, theoretically, a messenger named Tiny. (I say “theoretically” because the corpulent stand-up never once straddles a bike seat, possibly because he couldn't.)

The synth-heavy score comes courtesy of Genesis keyboardist Tony Banks, and it immerses you in the era — so much so it feels like more energy went into crafting the soundtrack than the script. Roger Daltrey had a slight hit with the Giorgio Moroder song, “Quicksilver Lightning”, and other '80s soundtrack regulars, including Ray Parker Jr., and John Parr appear as well.

To go along with multiple extended chase scenes, that other '80s cinema staple — the musical montage — gets heavy usage. No fewer than three of these occur within the first 30 minutes while we await an actual story. One of these vital plot breaks involves Kevin Bacon at home with his modern-dance/ballerina girlfriend. Despite being destitute, Jack and his leggy lovely somehow San Francisco loft that is roughly the size of a parade float manufacturing center. Behold its size as you watch the couple interact, like all lovers do, silently professing mutual love by incorporating their dance and biking professions:

It becomes the job of the viewer to find the plot amid these interludes. We begin with Bacon riding in a taxi. A bike messenger cruises beside his cab, and for no reason we can understand, Jack tells the driver he’ll pay him 50 bucks if he beats the bike rider to his destination. The bike dodges obstructions and the cab skids to a halt as the courier loses his beret. Jack races over and clutches the abandoned headpiece, and we are supposed to grasp that an unspoken bond has been forged by these two.

Revel in a feeling of revulsion as Jack grips a stranger’s sweaty, grime-coated hat! At the start of Quicksilver, Bacon wears glasses and sports the facial hair of a sexual sadist, looking every bit like the serial killer that neighbors are always surprised to learn has a softball team buried in the back yard. (This is the same look Bacon sported in his recent commercials for Logitech, by the way.)

Jack works as a hot shot trader at the San Francisco Commodities Exchange. He and his partner Gabe try to corner the market on a stock only to have its price move on them, causing the pair to lose millions, including the life savings of Jack’s parents. He is so distraught that next we see him opt for street urchin fashions, ditch the glasses, shave off the pedophile moustache, and grow his mullet out to its Footloose splendor. He is now working for Quicksilver Courier Service.

Jami Gertz plays Terri, a new hire, and this allows us to be introduced to the United Nations staff. When asked where she’s from Terri tells Hector (Paul Rodriguez) she moved around a lot because her father was a jet pilot. (Apparently the Air Force has military bases in Chicago and Detroit.) She meets Jack, but there is also a dark undercurrent to their profession: When after a meal at a diner, Terri cannot find her money, a suspicious man ominously offers to pay for her meal.

The top rider at Quicksilver is Voodoo (Lawrence Fishburne), who augments his salary by making runs of contraband for a local hood named Gypsy. He happens to be the guy who bought Terri’s waffles. As villains go, Gypsy is not the most intimidating. He motors around the Bay Area in a sad, rundown Ford LTD, perhaps waiting for MTV's Pimp My Ride to be invented.  Gypsy and Voodoo have a professional disagreement, and ,later, when Jack and Voodoo challenge each other to a race that is the focus of another montage, Gypsy runs Voodoo down in the street. This means Jack Casey is now the top rider at the service. I guess it also means he needs to get a new goofy name. 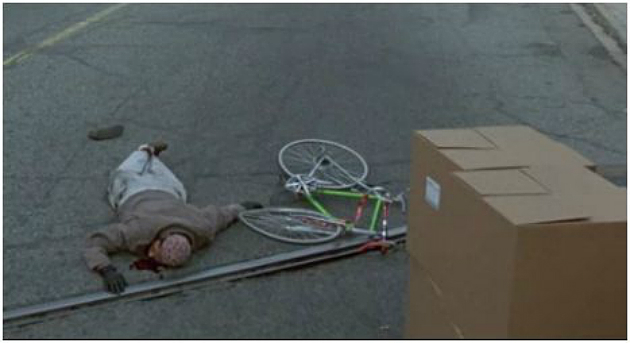 Soon enough, the plot gets yanked forward by the aspirations of the riders. Hector has a pregnant girlfriend and dreams of one day owning a hot dog cart. Gypsy orders Terri to take over Voodoo’s duties. (Somehow she has become indentured to a criminal over a $5 breakfast tab.)

Meanwhile, Jack is getting lured back to his brokerage life by his former partner. Initially, he resists, explaining his new lifestyle to Gabe:

“When I’m on the street I feel good – I feel good, I feel exhilarated. I go as fast as I like, faster than anyone. The street sign says one-way-east [CLAP] I go west. They can’t touch me! When I’m on the bike I forget about . . . I dunno - I dunno.”

Okay, so it’s not the Henry the V battlefield speech, but you feel his passion . . . I guess. The financial pressures on Jack and his friends inspire him to revisit his past for the finale. After weeks of studying the Wall Street Journal he's convinced he's found a surefire stock choice, so he takes his shot. At the exchange Jack gets a VISITOR pass, strides onto the floor and begins buying call options instantly. And — SPOILER ALERT — after a few tense hours, his stock leaps two points in a matter of minutes! He pockets around $50,000 for a few hours' work, everything is resolved and everyone, including his parents, get their share of the profits.

I had to resort to an expert opinion as this felt more than ridiculous.

Writer Brad Laidman, who had actually worked on that very options floor, assessed Quicksilver's realism factor. Laidman actually recognized people on screen as legitimate exchange workers, so he knew the details. “While I could see him getting the pass and visiting the floor,” he explained, “there was no way in hell he’d be able to walk out and start trading that day. It’d take a month of paper work to get a trader’s badge, and he’d have to establish an account with the exchange.”

“What they showed was like buying a ticket to a Chicago Bulls game, and somehow you found yourself on the court, taking the winning shot. Then later, he goes in the back and they start printing out checks, like he was at the race track. The whole thing was a fantasy.”

As I suspected. But hey, this wouldn’t be Hollywood without a Hollywood ending. Jack sort of separates from his girlfriend and sort of gets together with Terri (after barely interacting with her up to that point). They happily amble up to their friend Hector, who's doling out his dream dogs — the movie's way of telling us that everyone lives happily ever after. 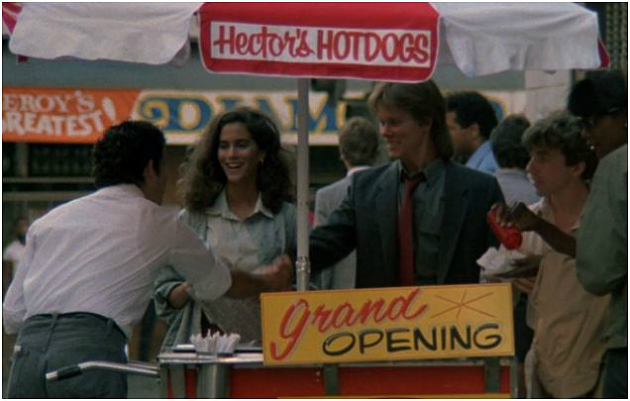 Studios love lecturing on the venal capitalist undercurrent in this country, and yet look what they were selling audiences circa 1986: For a white guy studying the newspaper and wearing a tie, one afternoon if enterprise would net you tens of thousands of dollars. Meanwhile, if you were ethnic, applied yourself and worked extremely hard, you got the a shot at hustling tube steaks from a cart on a street corner — provided you had a smart white guy to help you out.

Read more in the Bad Movies We Love archives!