Judith Crist, Trailblazing Film Critic, Passes Away At 90 — Watch Her Look Back On A 50 Year Career 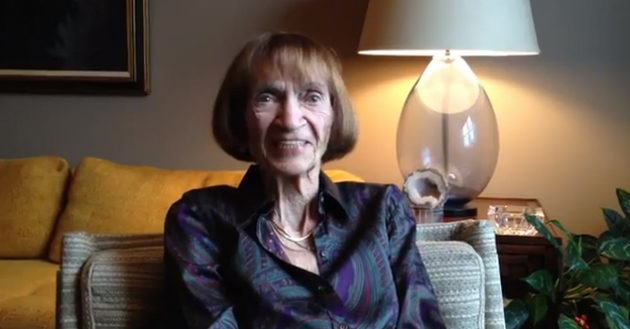 Decades after making a name for herself as reporter and film critic at the New York Herald Tribune, New York Magazine, and the Today show, trailblazing journalist Judith Crist died Tuesday in Manhattan, confirms the New York Times. Crist additionally wrote for TV Guide, Saturday Review, Gourmet and Ladies’ Home Journal during her career, which included a longtime stint as professor of journalism at Columbia and a cameo in Woody Allen's Stardust Memories. After the jump, watch an interview with Crist filmed in May, on her 90th birthday, in which the spry critic took a look back at her fruitful career.

Speaking with Columbia J-school deans Sree Sreenivasan and Melanie Huff in May, Crist expressed her delight at making it to the year 2000, let alone 2012, with an infectious energy and wit.

“The most enjoyable part of living a long time is that it happens so quickly," she said. "I have to stop and think, ‘My word, it’s a long time.’ When I think of all the things that have changed, I don’t look back because I’ve had a wonderful life and so I've got nothing to bitch about."

The critic whom Roger Ebert, Tweeting today, referred to as "a tigress with high standards and great influence," famously eviscerated then-celeb couple Liz Taylor and Richard Burton in her review of 1963's Cleopatra. Scathing and thoughtful in good measure, Crist's gloriously epic 1,700-word review is viewable in full on the Columbia website, and caps with one of her more famous critical nuggets:

A painstaking attention to tiny details makes it all too obvious that nothing has been spared on the sets and costumes. There are indeed some beautiful and impressive photographic effects, with transitions made by having faded frescoes slowly brighten into a live scene or a scene free and dim into a fresco. But the sets themselves never create an illusion of permanence. The cardboard and paint are there. Even in their most dramatic moment, when Cleopatra and Antony are slapping each other around in her tomb, one’s most immediate image is of Miss Taylor and Mr. Burton having it out in the Egyptian Wing of the Metropolitan Museum.

All is monumental – but the people are not. The mountain of notoriety has produced a mouse.

Crist's passing prompted many of her former students to take to Twitter in praise of their onetime professor. "As a former student, I paid to be in her critical crosshairs. Not fun, but 4ever instructive," Tweeted Fast Company's Jennifer Vilaga, while New York Times reporter Christine Haughney called Crist "one of the toughest and best professors I ever had."

"I think that journalism is in a state of flux, just as all our means of communication right now are," Crist said in her May 2012 interview, included below. "But to me the intense curiosity that is basically journalism ... a journalist's own curiosity about why we do this the way we do it and so on, I think that's perpetually with us."