If William Friedkin’s adaptation of The Exorcist left you feeling a tad jumpy, just wait until you see Killer Joe.

After a six-year absence from the Cineplex, the 76-year-old Friedkin returns to the big screen on Friday with arguably the most disturbing film of his 45-year career.

The ultra-violent and twisted black comedy stars Matthew McConaughey as Joe, a Dallas detective who moonlights as a hitman. After a client (Emile Hirsch) stiffs him on a job, Joe takes his sister (Juno Temple) as a retainer.

Friedkin refused to cut the picture to earn an R rating, and it’s that uncompromising spirit that permeates his body of work.

One of the most compelling directors to emerge from the easy riders-and-raging-bulls era, Friedkin broke through in 1971 — and won a Best Director Oscar — with the police thriller The French Connection. 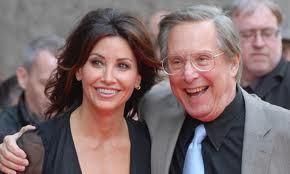 Two years later he would direct the white-knuckle horror masterpiece, The Exorcist, solidifying his standing in the pantheon of '70s filmmakers that includes Coppola, Lucas, Cimino and Scorsese.

Friedkin has not since matched the critical and box office heights of The French Connection and The Exorcist, although he showed glimpses of his greatness with such films as Sorcerer — an intense remake of Henri-Georges Clouzot's The Wages of Fear set to a Tangerine Dream soundtrack — and To Live and Die in L.A..  He has, however, worked steadily.  Killer Joe is his second collaboration with Pulitzer Prize-winning playwright Tracy Letts.  Friedkin first adapted Letts' play Bug for the screen in 2006.

Over the last six years he has also directed opera and episodes of CSI and worked on his autobiography.

As bold with his words as he is with his filmmaking, Friedkin had a frank discussion with Movieline about the ratings board, his disinterest in today’s studio films, why making The Exorcist into a TV show is “bullshit” and that Twitter photo of him as Ali G.

Had you and Tracy been discussing Killer Joe since making Bug?
No, we only casually discussed it then, but a couple of years after Bug he sent me a screenplay.  I read it and thought it was great. I called him back and I said, "Look if I can cast this and find somebody to finance it I’d love to do it," and that was it. It took about a year to put together.

What are the challenges of adapting a stage play to the screen?
Films come from many different places. They come from plays, they come from actual events, from novels, from people’s own experiences. I’ve made 16 films in 45 years and they came from all those places. Some of the greatest films ever made were originally plays. Casablanca was a play called Everybody Comes to Rick’s.  A Few Good Men was a play. Cabaret was a play—

But aren’t there things that work on stage that need to be tweaked in order for them to work on film?
Not in a great piece of writing, like Streetcar Named Desire. The entire play takes place in the Kowalskis’ house in New Orleans. But you don’t think of it as a play. What you remember is Brando and Vivien Leigh and Karl Malden and how touching and emotional the situation is.

The major challenge in making Killer Joe was to cast it properly. After that the writing is so good you just had to do it. You had to cast it with people who could understand it and reach down into their own life experiences to make it live.

What did you see in Matthew McConaughey?
He was being interviewed on one of those Larry King-type television shows and I saw him as himself, not as a guy in a romantic comedy. I thought this guy is really interesting and smart and very self-knowledgeable. He’s not this guy in the rom-coms. He’s from East Texas and he had the right accent and all of those things went well. I was originally going to go to some grizzled old warhorse to play Joe. But after watching this interview I thought, "This would be interesting: A good-looking guy who could charm the mustard off a hot dog."  I thought, "This is the way I want to go."

So I sent the script to  [McConaughey], and when we first met he told me that he didn’t get it. He didn’t understand it and he just tossed it. And then he started to think about it, and he thought, "Well Jesus, this is funny. This is absurdly funny." So he read it again, and he saw the humor in it as well as the danger. And he decided to take control of his own career and challenge himself with this. We met a couple of times to make sure we were on the same page and then I cast him.

It’s certainly a role that will surprise people that know him from his Hollywood titles. Along with the comedy, I was surprised by how sincere his character could be¾especially the monologue he gives about East Texas.
Well, it starts with the writing, and that’s what attracted the cast and me. [Letts’] people are real. They jump off the page. And I know all these people. None of them are strangers to me. Letts actually got the idea from a news article he read of a situation similar to this that happened in Florida.

A big cloud hanging over the film is its NC-17 rating. This isn’t your first time having to fight the ratings board. Cruising was originally given an X rating.
I had to go back 50 times to the ratings board with that film.

Did that experience play a factor in how you handled the decision to stick with the NC-17 rating?
Yeah. That’s basically what I thought, and I had to get the support of my distributor LD Entertainment. They were with me. They didn’t want to cut this film up into toothpicks.

I think the rating is correct, by the way, although my view of the ratings board is very cynical and critical.  I think they’re an arbitrary board with arbitrary standards. They’ll never give a major studio an NC-17. Never. What will happen is, behind closed doors, a major studio will make little nods and bows to them by cutting frames or shots here or there.

Do you see yourself ever making another studio film?
I doubt that I’ll ever work for a major studio again.

Are you even interested in the kinds of movies they make now-the comic-book adaptations and raunchy comedies?
Absolutely not. I don’t watch them and I certainly don’t want to make them. I’m not into Spandex. [Laughs]

I’ve only done 16 films in 45 years. I look for stuff all of the time, but every film I’ve done took at least two years of my life. The Exorcist took three after all the press was done.

Since the ‘90s you’ve been directing operas such as Puccini’s Gianni Schicchi  for the Washington National Opera. Have you always been interested in them?
No. I don’t go to operas. I listen to them on recordings sometimes. Zubin Mehta got me into directing operas. He’s a friend, and a great conductor, and we used to talk about music and movies. One day he said, "Why don’t you do an opera with me?" And I said, "Geez Zubin, I’ve never seen an opera." And he said, "No, I think you’d be very good." And he talked me into doing an opera. My first one was in 1998 in Florence and recently I did another opera in Florence.

How many have you done?
I haven’t counted, but I think I’ve done more than 12 since 1998. I just did Tales of Hoffmann in Vienna.

Do these bring as much satisfaction to you as filmmaking?
Definitely. It’s live musical theater and you’re dealing with material that’s 100-150 years old which means it has stood the test of time. The operas I’ve done are all classics.

The Exorcist is closing in on its 40th anniversary.
Hard to believe.

It’s been in the news lately. Have you seen the play in LA?
I haven’t seen that yet, I’m going to see it at the end of the month.

And there’s a TV adaptation in the works.
That’s bullshit. They don’t have the rights. [The Exorcist novelist] Bill Blatty still has the rights and he doesn’t want to see an exorcism on TV every week. I wouldn’t watch it-not even out of curiosity. It would just be total bullshit.

But they’re going to rerelease The Exorcist in the late fall at the Smithsonian in Washington and then there will probably be some more theatrical and then a brand new Blu-ray that I just finished a few months ago.

You’ve recently joined Twitter, are you enjoying it?
Yeah. I think it’s a lot of fun. I take a half hour a day and read what people have to say and occasionally I think it’s worth a response.

I see you’re very big on posting photos. And one in particular grabbed my attention—
Me as Ali G?

Yeah!
I lost a bet to Sir Evelyn de Rothschild of the Rothschild family. The loser had to dress up as Ali G and I lost the bet. I wasn’t going to do it, but he bought me the costume. And I said ok. So he bought me all the bling and the costume and his wife took the picture.

What’s the latest with you trying to get the rights to Sorcerer?
I’m in the 9th District Court of Appeals suing Paramount and Universal because they both claimed they don’t own the film anymore and they don’t know who does. So I had to sue them to try to find out so I can get it back in release to the people who want to see it, which are largely film society and universities and people like that who are being denied the right to see that and many other films. The studios want to get rid of all 35mm [prints] and not even have any bookkeeping around by them. By November 26 there’s a settlement conference and if we can’t settle it by then there’s a trial in March of 2013. And I’ll go all the way with it, if it costs me every penny I have.

What are you doing next?
I don’t have any plans other to finish my autobiography. It will be out by the spring of next year. I’m not considering any other films right now.

Is that because there’s nothing out there that interests you?
I’m busy, but I haven’t seen anything I’m really interested in filming.

Killer Joe is in limited release this Friday.