A caped crusader. A city wiped clean of criminals. A madman with a doomsday device who terrorizes the populace until average citizen heroes step forward to help save the day. Batman? Nope! On the heels of The Dark Knight Rises, Movieline takes a look back at 1999's Mystery Men, new to Blu-ray, in the latest installment of Inessential Essentials.

Why It's an Inessential Essential: Based on characters by comics creator Bob Burden, Mystery Men is an anomalously charming and amiably goofy superhero film. The film is very much a product of the creative chaos that ensued after Hollywood executives realized comic book properties like Batman could make a mint at the box office. But with many more duds than hits on their hands, execs were apparently clueless about what they should adapt and how to do it. It's not only strange that a movie with characters as alienating-ly campy as the ones in Mystery Men ever got made — it's even freakier to note that the film is actually pretty funny. So while mass audiences didn't know what to make of the film when it was initially released, the film can now be enjoyed as a more than welcome antidote to the recent trend of self-serious but mostly drab superhero films.

Mystery Men was co-produced by Dark Horse Comics publisher and creator Michael Richardson, the man responsible for turning such comic book properties as Tank Girl (1995) and The Mask (1994) into half-baked films. It was directed by Kinka Usher, making a big leap from being the assistant camera operator on such films as the 1987 Kato Kaelin vehicle Beach Fever (Usher would not go on to direct any other movies after Mystery Men, not even short films). Usher clearly directed the film in the style of the Joel Schumacher Batman movies; he makes frequent use of campy Dutch angles, crash zooms and first person POV shots, like the one where we see Ben Stiller being attacked by Geoffrey Rush's character — from the perspective of Rush's extended pinky. To call this film's success as a comedy anomalous would be putting it very diplomatically.

In the film, a group of wannabe superheroes that mostly don't seem to have any real powers band together to fight the nefarious disco-obsessed Casanova Frankenstein (Geoffrey Rush, who had just won an Oscar for Shine two years before Mystery Men was made). Now that Frankenstein has kidnapped the all-powerful Captain Amazing (Greg Kinnear), the only people that can stop him are the then-unnamed group of heroes: Mr. Furious (Ben Stiller), a tantrum-throwing wimp who isn't very strong; The Shoveler (William H. Macy), a middle-class father and a guy that fights crime with a shovel; and the Blue Raja (Hank Azaria), an adenoidal mama's boy who pretends to be a British mystic and uses flatware as projectile weapons (mainly forks and spoons). To defeat Frankenstein, the team has to hire some new members, including the gaseous Spleen (Paul Reubens) and the haunted-bowling-ball-chucking Bowler (Janeane Garofalo). It's a fittingly unusual line-up for a rather odd film.

By today's standards, Mystery Men is seriously dated. For starters, Smashmouth's "Allstar" is used twice as a song cue. But it's also often disarmingly eccentric, as in the scene where Tom Waits, who plays a mad scientist, shows off his arsenal of weird weapons (including the Blame Thrower), or the one where Wes Studi's enigmatic, platitude-slinging hero The Sphinx trains the titular heroes ("To learn my teachings, I must first teach you how to learn"). All of the characters are also endearingly neurotic, like Invisible Boy (Kel Mitchell, of Keenan and Kel fame), a teenage loser who can only turn invisible when nobody else is looking at him, or Garofalo's Bowler, a woman whose dead father nags her even from beyond the grave. Filmed on a reported $68 million budget, Mystery Men only grossed $33.4 million worldwide but went on to earn something of a cult status. 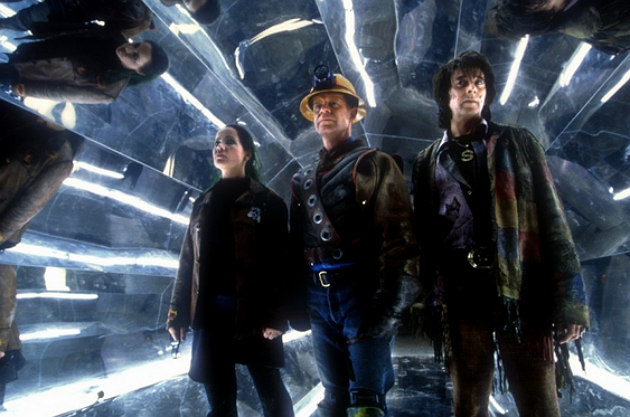 How the Blu-Ray Makes the Case for the Movie: You can appreciate just how bizarre Mystery Men is just from watching the Spotlight on Location featurette, which makes it seem like the film's production was pretty manic. For instance, Stiller reveals that the film's cast were working with an improv-reliant script. "We're always coming up with ideas, which is the fun thing about..." Stiller says, comically pausing to look around him and finishing his thought, "not having a script." Garofalo and Stiller both joke about the fact that they had little confidence in Usher. "I'm only doing this for the money," she teases. "Kinka doesn't know what the fuck he's doin'. He hasn't directed a movie before." Even nice guy Greg Kinnear chimes in: "I describe [Mystery Men] as...a cartoon gone horribly, horribly wrong." But Usher got results; even the film's deleted scenes, like the one where Waits macks on a blue-haired retiree by telling her that he's actually a doctor, are pretty funny.

Other Trivia: In a rather thoughtful special feature, Burden shares a detailed history of his original comic book characters through interviews conducted before the film's release. It's especially funny to note that the character of the Shoveler was originally armed with King Arthur's singing shovel, which was sentient and talked in "Middle English." Also, apparently, Danny DeVito was supposed to not only direct the film at one point but play the Shoveler, too. Burden is also quoted in a Comics Buyer's Guide interview as saying that he didn't write the characters with modern actors in mind. "Originally, as I envisioned them, the Mystery Men were characters like Ernest Borgnine and Vic Tayback — all Mike Ditka-type guys. The only current star I could've seen as a Mystery Man would've been Steve Buscemi from Fargo."