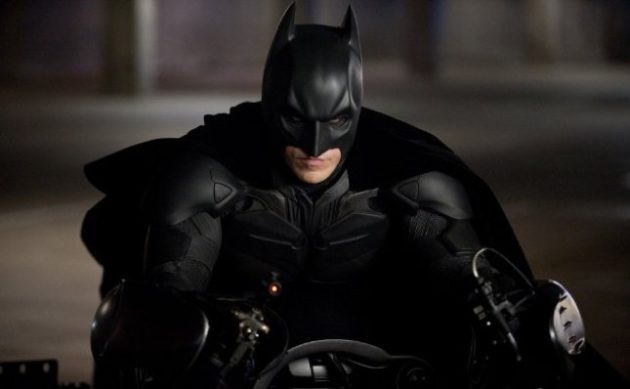 The Batman brand is in the toilet at the outset of The Dark Knight Rises, the third and most self-consciously ornate pillar of Christopher Nolan’s caped crusader resurrection trilogy. The four years since The Dark Knight have passed as eight within the city state of Gotham — one of the neater doublings in a movie inlaid with prismatic tiling — and even the mayor condemns Batman as “a murderous thug.”

The late Harvey Dent, by contrast, has been canonized as a civic hero; something called the “Dent Act” has ushered in an era of safe streets and soft despotism. Bruce Wayne (Christian Bale), meanwhile, is still heartbroken over the murder of Rachel Dawes and said to be peeing in Mason jars and polishing his curly fingernails in some shuttered wing of Wayne Manor. As a memorial for Dent drones and tinkles smugly on, the movie’s animating question flickers across Commissioner Gordon’s (Gary Oldman) face: Batman died for this?

The this at the heart of The Dark Knight Rises is a city whose predicament is conceived broadly enough to accommodate any number of thematic readings, but too hedged to explore any one of them well. In winding up at casual cross-purposes, the film’s perspective on governing power structures and mass psychology (to name only two) feel like Nolan playing ideological peek-a-boo. Despite heavy provocation, it’s a movie that can only supply embarrassment to those who look beyond the gleaming chaos and heroic suffering for meaning. What it amounts to is a frantic set of distractions from an uncommonly thrilling ride on the old Gotham express.

Bruce Wayne’s first warning of what’s to come, and what’s happening beyond the manor gates — the Catwoman in the coalmine — arrives in the figure of a burglar named Selina Kyle (Anne Hathaway, tart but sexless). Selina draws Bruce out of hiding — something a philanthropist on the clean energy tip played by Marion Cotillard couldn’t manage — and warns him of a coming storm that will level the elite and the commoner. When the faithful Alfred Pennyworth (Michael Caine) implores him to focus on deploying his dwindling resources and building a better (or any) personal life, Wayne takes it as a challenge to his alter ego’s honor and his failing body.

Meanwhile, Commissioner Gordon is paying more attention to his gut than the crime statistics, and it’s telling him something is rotten in Gotham. What that might be is considered from several angles — computer chaos, corporate greed, social inequality, nuclear threat, economic terrorism—and we wait to see which will prevail. Nolan never quite chooses, though, opting for a little bit of each whenever it’s convenient. Bending over all of them, in an arc extended from The Dark Knight (there are even more direct connections to Batman Begins), is the obsessive pursuit of Batman’s “true” identity. “The idea was to be a symbol,” Wayne sighs to a hotfooted cop played by Joseph Gordon-Levitt. But there’s no place for symbols in a search-engined society; nothing so delicate can survive in cold, data-based climes. The city clamors for Batman, wanted for the death of their hero, on a plate: This Gotham seems destined for slow-motion self-destruction; our villain’s arrival is framed as more of a helping hand.

They may have forsaken Batman, but the city’s need for viable symbols is borne out in the heavily spackled image of Dent, and, from his first appearance in the bravura prologue, the intransigent evil embodied by Tom Hardy’s Bane. “No one cared who I was until I put on the mask,” Bane gurgles (not true Tom Hardy! Not true!) in vocoder tones I’d put somewhere between Yoda post-testosterone patch and Sean Connery on appletinis. Batman’s comeback is hamstrung at every turn — by his vicious new opponent, by the police (led by Matthew Modine’s canine would-be commissioner), and by an app-loading tablet that the superhero considers in the universal stance of tech-befuddlement. Consigned, after a colossal ass-whipping, to a vaguely Arab hellmouth with handy cable news access, Wayne spends the middle chunk of the movie striving for the spiritual strength to escape in time to keep Bane from his plan to “feed the people hope to poison their souls” before blowing the whole city to pieces. A sub-tangle with nuclear power, which is framed as both the savior of the world and its destroyer, provides the movie’s ultimate double.

But Bane’s motives are obscured too long and too provocatively to succeed in drawing us into the wildly nettled political revolution he comes to represent. We’re told his power derives from his fanatical belief — something a privileged playboy can’t buy — but in what? His is a psychology of convenience and comic-book dogma, which is only a problem insofar as the film insists he have a psychology at all. Bane’s proselytizing about social equality and death by moral complacency inspires real dread, but again Nolan isn’t prepared to stand behind the incendiary postures he strikes. There’s always an out, in this case the fact that Bane’s politics are just a theatrical prelude to less complicated darkness.

Undeniable is Hardy’s menace: Less a man than a masculine experiment gone awry, he seems to be strutting naked even in boots and crust punk combat gear. What Bane is most clearly is a terrorist, from his vaguely plotted assault on Gotham’s stock exchange, to the fondness for human shields and Taliban-tinged sports stadium executions, to the plan not to rule or capture the city with a grand gesture but to wipe it out.

Though it was filmed in several locations, including Pittsburgh, in this installment that island city is most obviously New York, from the glimpse of the scaffolded Freedom Tower to the crippled Brooklyn Bridge to the richies dragged out of their Fifth Avenue penthouses. If anything the pretense of Gotham adds a certain gratuitousness to the clear references — symbols pulled out of their context for sheer, emotion-zapping effect. Beyond that a scrappy city all its own emerges, where Batman is just another part of the steeply vertical landscape and it wouldn’t be all that odd to find him slugging it out in the streets, as in his climactic, cleanly drawn confrontation with Bane. Beginning with a thrilling underground, multi-vehicle chase and through a series of old fashioned brawls, Nolan, director of photography Wally Pfister and editor Lee Smith restore a baseline of coherence to the action that in some instances has the feeling of a many-paneled page, with levels and layers of action — a ka-pow over here, a thwack over there.

If New York is Gotham’s most obvious touchstone this time out, the Windy City asserts itself in Nolan’s script (co-written with his brother Jonathan, working from a story by Nolan and David S. Goyer). The dialogue is inflated to regulation turgidity and then some. Hathaway does her best, but without Heath Ledger’s Joker there’s no one to let the air out now and then, which makes this week’s cinematic rendering of the apocalypse more terribly earnest but also more genuinely terrifying than most. Along with making the most prominent case for the continued relevance of the auteur theory, with this trilogy the British director reminds us that well-built brands never really die. Certainly one elegiac current running under the The Dark Knight Rises is that they don’t make them like Batman anymore, either in Gotham City or your local cineplex. During its more didactic lapses, episodes of shocking darkness and overwhelming density, you can practically make out the silhouette of Nolan looming behind the screen, appraising us with folded arms: Do they deserve this movie? Are we worthy of it?

The Dark Knight aspires to the epic and reaches it on a number of impressive and less impressive levels. That it is a frequently, unnervingly glorious triumph of brawn over brains is not despite but in spite of Nolan’s admirably stubborn — if persistently, risibly serious — insistence that the modern superhero can have it all.