Is There a Ted 2 In the Works?; The Absence Wins Top Comic-Con Prize: Biz Break 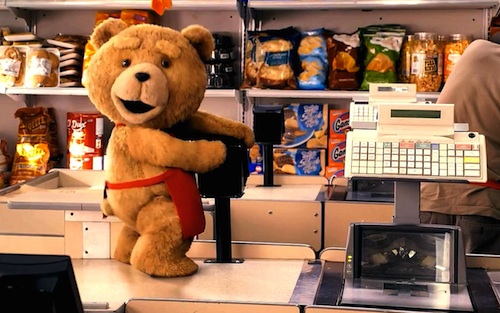 Also in Monday morning's round-up of news briefs, Daniel Radcliffe is set to return to fantasy playing a rape suspect. A trio of titles lead the specialty box office's newcomers over the weekend. And Roger Ebert breaks down the stats on upcoming dueling The Hobbit and Avatar blockbusters and theaters' ability to show them.

Seth MacFarlane: "I'd be open to making Ted 2"
MacFarlane told fans at the American Dad panel during Comic-Con over the weekend that he'd be open to making a Ted 2, but didn't elaborate on any possible reunion with co-star Mark Wahlberg. It has become one of the biggest R-rated comedies at the box office, Deadline reports.

Daniel Radcliffe to Grow Horns for Next Role
The British-born actor will return to fantasy for his next project, starring in Horns, a supernatural thriller directed by Alexandre Aja (Piranha 3-D). He will play the lead suspect in the rape and murder of his girlfriend, The Guardian reports.

The Mega-Epic Pissing Contest
Peter Jackson caused a stir saying he'll release his upcoming The Hobbit at 48 frames per second, to be released in two parts in December 2012 with the follow-up a year later. James Cameron, meanwhile, plans to shoot Avatar 2 and the follow-up at 60 frames per second. The standard frame rate, however, is 24 frames per second and there are many theaters that do not have that capacity, Roger Ebert breaks it all down.