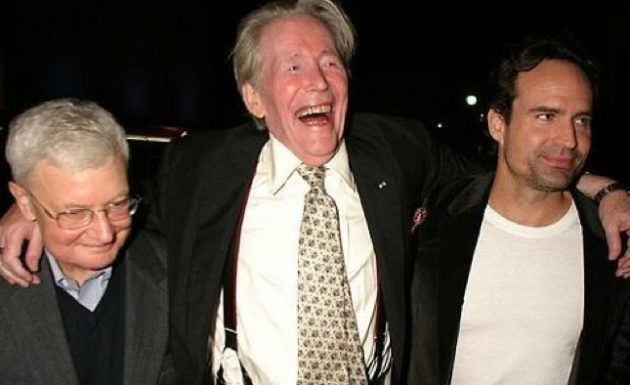 It's not as though Peter O'Toole died this week when he announced his retirement from acting, but contemplating the Irish great's absence from stage and screen alike nevertheless yields a bittersweet fog of remembrance through which our hearts and souls must now navigate. I think they call it a "hangover."

Thankfully, there is video (to say nothing of the gloriously soggy moment in time, above, when Roger Ebert and Jason Patric found themselves supporting the legend). For my money, nothing beats his epic entrance on a 1995 episode of The Late Show, where David Letterman welcomed O'Toole and a thirsty camel named Topsy to the stage in London. What happened next put Lawrence of Arabia to shame.

And who will ever forget (ahem) O'Toole's celebrated performance as the sodden title character in Keith Waterhouses's play Jeffrey Bernard is Unwell? (Dialogue NSFW, though under the circumstances what could possibly go wrong with slowly turning your chair to your boss and/or any other objecting parties and woozily sputtering, "It's Peter O'Fucking Toole. Listen!")

Here he is duetting with — and tackling, naturally — his late, lamented contemporary Richard Harris ahead of a rugby match in Ireland.

It's not quite O'Toole, but back on The Late Show in 2011, you can practically taste the sauce in Ryan Gosling's tale of confronting the actor on Oscar night a few years earlier.

Oh! And he acted in a few things en route to becoming the losingest (0-for-8, ouch) acting nominee in the history of the Academy Awards. He did, however, deliver a reasonably sober acceptance speech for the honorary Oscar he received (despite trying to refuse) in 2003. By way of our partners at ENTV, here's a run through O'Toole's screen highlights. Happy retirement, Peter! We'll send whiskey.