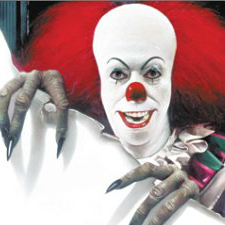 Wrap your brain around this: Stephen King's It, the 1986 horror novel that spawned a 1990 miniseries and established Pennywise the clown as one of our most enduring collective nightmares (I still can't pass a rain gutter in the street without wondering) is being adapted into a movie in two parts. By the guy who made Sin Nombre and Jane Eyre! Wait, what?

THR reports on the two-film adaptation, which is moving forward with director Cary Fukunaga onboard. Fukunaga, whose last effort was the hauntingly beautiful period adaptation Jane Eyre, will co-write the horror tale with Chase Palmer (Dune).

It follows the plight of a group of friends dubbed The Losers Club who discover the insidious creature called It, a nasty being who's fond of appearing in the guise of the most terrifying clown known to mankind and hiding in the sewers. They encounter It in two periods -- as children and later, as adults -- which seems like the obvious way to split the new iteration into two films.

The idea of this new adaptation probably sounds more bizarre and random than it will turn out to be, given that Fukunaga's a gifted filmmaker and, understandably, one who has seemed to choose his projects with care, not wanting to be pegged as one kind of director or another. Well, consider the portfolio diversified! Now, to steel myself for another two brushes with Pennywise...