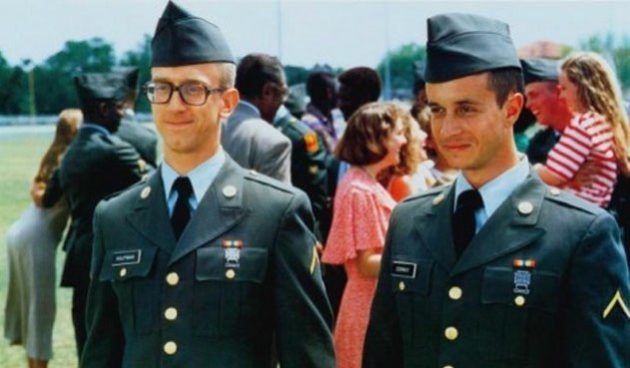 I don't recall the 1994 Pauly Shore/Andy Dick effort In the Army Now being a "huge box office success and fan favorite," but I'm happy to take the co-stars' words for it if it means leaving well-enough alone and not foisting In the Army Again on an unsuspecting population still reeling from a decade of war abroad. Even if it means not seeing them save "Katey Parry [sic] from a USO show gone bad" — our national psyche has endured enough, has it not?

That's all I've got for this announcement, which unfortunately coincided with Memorial Day weekend and will not be ignored:

Beverly Hills (MMD Newswire) May 23, 2012 -- (www.FilmOn.com) - Yesterday, over looking Cannon Drive in the heart of Beverly Hills, Pauly Shore was a guest on Andy Dick Live, a weekly live internet TV show filmed at FilmOn.TV Studios. Among girls in bikinis and Andy Dicks [sic] usual group of crazies, Andy and Pauly discussed their past films including their huge box office success and fan favorite, In The Army Now.

"I've always said we should do In The Army Again," said Andy Dick. "We should rescue Katey Parry [sic] from a USO show gone bad or something."

Pauly Shore loved the idea. "We just need a script and someone to back the project and I'm in."

Billionaire and FilmOn.TV CEO Alki David jumped in, "I'll back it if both of you star in it." Right there streaming live, film history was made. Andy Dick says a treatment is already written and they will be writing the script as soon as possible.

Good grief. I mean, where's Judicial Watch to investigate these guys' military-flick aspirations when you need them?