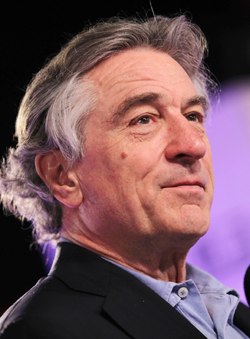 Also in Friday morning's Biz Break, the Weinsteins go for a sneak of their latest French release paired with Oscar-winner The Artist, the Time Warner chief's recipe for how to combat movie piracy, and more.

Robert De Niro and Michael Douglas Team for CBS Films' Vegas
Last Vegas is a comedy about four old friends who decide to throw a Las Vegas bachelor party for the only one of them who has remained single. De Niro will play the party-averse Paddy Connelly, who reluctantly agrees to fly to Vegas at the request of his friends. Douglas will play Billy Gerson, a lifelong bachelor, who has finally decided to take the plunge. Good Universe, which launches its global sales operation in Cannes this month led by principal Joe Drake, is handling international sales.

Rachel McAdams to Star in About Time
McAdams is in negotiations to star in the latest romantic comedy from British filmmaker Richard Curtis. McAdams would play the dream girl, a role Zooey Deschanel had once been attached to play, THR reports.

Zooey Deschanel to Play Loretta Lynn on Broadway
Lynn introduced Deschanel on the stage of the Ryman Auditorium in Nashville Thursday night. Back in 1979, Lynn introduced Sissy Spacek on stage at the Grando Ole Opry in the movie Coal Miner's Daughter, which would eventually win Spacek an Academy Award. THR reports.

Weinsteins Sneak Intouchables with The Artist
Six theaters in New York, San Francisco and Los Angeles will host a sneak of French-language hit The Intouchables tied to The Weinstein Company's re-release of The Artist on Saturday. Intouchables opens May 25th in the U.S., Variety reports.

Movie Windows Must Collapse to Combat Piracy
Time Warner CEO Jeff Bewkes told Charlie Rose on PBS that the days of having releases appear in theaters a few months before they’re available on home video are numbered, Deadline reports.