How Adam Yauch Made the Greatest Concert Film Ever 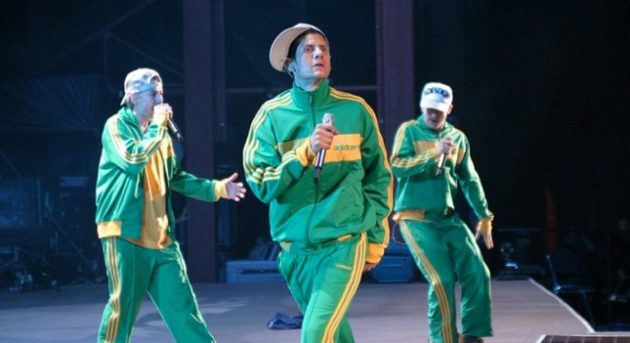 Editor's note: The following piece, originally published by the author at Movie City News, was written after the New York premiere of the Beastie Boys' concert film Awesome; I Fuckin' Shot That! in 2006. The project was one of many films and videos made by the Beasties' late Adam Yauch under his directorial nom de plume Nathanial Hörnblowér; Movieline today republishes the piece in remembrance. — STV

Admittedly, I am not what you would call a Beastie Boys enthusiast. I am not even a casual fan. The depth of my Beasties appreciation runs shallow at best: I like the “Sabotage” video as much as the next guy; “Fight For Your Right” annoys me; the hip-hop clown thing is endearing; and I tend to just take their (many) devotees’ word for it that the trio is rooted in prodigious creative genius. Fine. I do watch a lot of movies, however, which is why I feel comfortable assessing the Beastie Boys’ Awesome; I Fuckin’ Shot That! as possibly the greatest concert film ever made.

A second viewing at last night’s New York premiere confirmed my first impression, and the standing-room-only audience attending the Museum of the Moving Image-hosted event seemed to share at least some of that judgment. Not that it came out when the Beasties themselves – ”Mike D” Diamond, Adam “Adrock” Horovitz and Adam “MCA” Yauch – joined the crowd for the requisite post-screening chat.

“How do you stay in such great shape?” a viewer asked.

“As members of a basketball team, we have a very strong work ethic,” Horovitz said.

“We have a workout tape we’re gonna be selling,” Yauch said.

Diamond spoke up. “Actually, the team, I think, has a poor work ethic, and I think everybody needs to talk about that before we get into next season,” he said. “You guys talk about how you want freedom on the court. Show me the stats.”

“Also, we rub ourselves down with monkey piss a lot,” Yauch said.

That the Beastie Boys never actually got around to discussing how good their film is kind of helps defineAwesome‘s transcendent appeal. The movie represents the raucous bastard offspring of goofball stunt and technical experiment; only a band that takes its mission as seriously as the Beasties do could conceive a film this determined to not take itself seriously. And only the Beastie Boys — whose interactive relationship with their fans manifests itself in multi-angle DVD’s and do-it-yourself remixes — would count on concertgoers to hold them to their own expressionistic standards.

Awesome‘s central gimmick is old news: The band gave 50 fans 50 cameras to record the entirety of its Oct. 9, 2004, concert at Madison Square Garden. “You can rock out, you can do whatever you want,” a producer advises the camerapeople at the beginning of the film. “Just keep shooting. … In 20 years, you’ll be able to look back and say, ‘Awesome; I fuckin’ shot that.’ ” The Beasties combined the crowd footage with that of a small backstage crew, and Yauch went to work.

“There were 61 different angles that we were cutting from,” said Yauch, whose other alias, Nathanial Hörnblowér, claims directing credit. “It was all loaded into Final Cut and stacked and we were cutting from that. It was a pretty crazy job. The way we started out was there were actually three different editors who went at it, and they had 20 cameras each, and they each did a cut. We were kind of looking it over and picked some parts that worked. We did a cut from that, and Neal (Usatin, supervising editor) and I stated cutting on top of that, and then spent about a year working on it. It was a good starting place, because it’s pretty hard to start with just, like, a blank canvas and start cutting from nothing when you have that much material.”

In the end, Yauch continued, Awesome comprises 6,632 cuts – an average of one for every 19 frames. It screens like a pixilated light show, drowning in color and kinesis, putting the “ADD” back in “addled.” Meanwhile, the rich, refined sound defies the visuals’ bootleg ethos. As occasionally challenging as this blend is to watch, it makes for revelatory viewing. No band since Talking Heads has preserved (or even established) such visceral identity while relinquishing this much aesthetic control.

But in downplaying posterity for the sake of experience, Awesome sets itself up as the anti-Stop Making Sense, the anti-Last Waltz, the anti-Woodstock, the anti-Gimme Shelter. Depeche Mode 101 trails a handful of fans on their journey to a landmark emotional event in their lives–DM’s 1988 show at the Rose Bowl — but D.A. Pennebaker’s film captures a sense of a moment more than any real sense of community. Dave Chappelle’s Block Party evokes moment and community as sort of a hollow auteur wet dream, with no less a force than Michel Gondry doing little more than pointing and shooting Chappelle’s swan song to swagger.

By placing them in the context of a genuine community (and if you have ever been to a sold-out show at the Garden, it is about as communal an atmosphere as 20,000 strangers are likely to find), Awesome de-mystifies its subjects. A man carts his running camera into the bathroom, while another tapes a concessionaire air-guitarring her way through the opening riff of “Sabotage.” One hapless woman turns her device on her relatively idle section, imploring, “Come on, get excited! We’ll be on the DVD.” Boyfriends shout lyrics in girlfriends’ ears, dances mimic each other. The most powerful stage presence, in fact, belongs to the Beasties’ DJ Mix Master Mike, whose showcases contribute the virtuosic complement to Yauch’s crude explosion of style.

That said, for all I lack in Beastie Boys knowledge, their film’s reflection of unhinged New York musical tradition is unmistakable. “That’s the thing with growing up in New York City,” Diamond said Tuesday night. “I think at the time we grew up, it was like hip-hop was evolving, there were incredible punk rock shows, hip-hop shows, reggae shows. Everything was in New York City. And then at the same time, I think even when we started playing shows ourselves–opening up for Run-DMC and LL Cool J and all these bands on tour–we learned so much from them. Being able to study that and everything, that was like…”

Horovitz gestured into the audience, “For me personally, I don’t know if I’d be doing this if my brother never played me Jimmy Spicer’s Super Rhymes,” he said.

“I can name some shows,” Yauch said. “Like when Funky Four Plus One came Downtown?”

But are the Beastie Boys a continuation of that spirit? That is for their fans to debate, although I should not be so quick to pass the buck – especially considering Awesome; I Fuckin’ Shot That‘s influence, its magic and my slow assimilation into their ranks. For once, at least for me, the Beastie Boys are a sight and sound to behold.

This piece was originally published March 29, 2006, at The Reeler, a blog hosted at Movie City News.