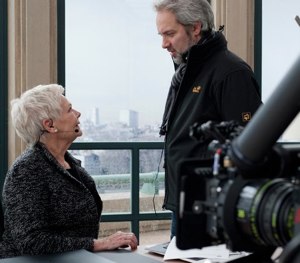 Not this again: "The eye behind such films as No Country for Old Men and The Assassination of Jesse James, [Roger] Deakins takes Bond into the digital age. Mendes promises his darker tone will bleed directly over to the physical look of the movie. 'I've worked with Roger twice [on Jarhead and Revolutionary Road], so I feel very comfortable in that relationship. There's a shorthand. You look at each other and know what you're thinking. He's a true artist. Right from the start of directing, I realized the most important two relationships were with my leading actors and the director of photography. You'll see in the teaser trailer that it has a very distinct look that does have elements of noir and British '60s. It's very English — a lot is set in England.'" [Hollywood.com]