On the Heels of Veep, Julia Louis-Dreyfus Catches the Indie Bug with Paris 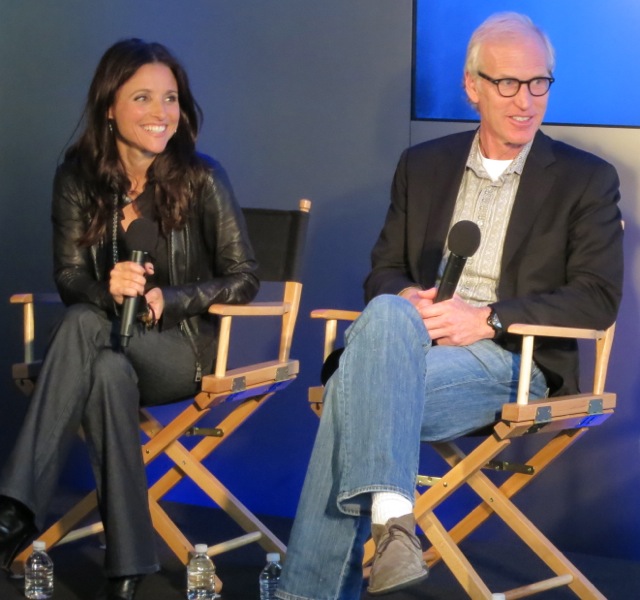 Actress Julia Louis-Dreyfus debuted her new HBO series Veep over the weekend, and she — along with husband/director Brad Hall — appears eager to add independent filmmaking to her repertoire. The pair hit the Tribeca Film Festival with their new short Picture Paris, teasing the project at an Apple Store event and hinting that this will not be their last foray into the indie space.

Starring Dreyfus, the film follows a woman with an extraordinary obsession with Paris and a surprising past. "It was a way to dip our toes into the independent film world," Dreyfus said at the event co-hosted by Indiewire. "It was like being in our old theater days, so we called in favors from friends and it was a great experience."

"The short is based on true life," Hall added. "We had a kid heading off to college and it's a major life-changing event. So I wrote a script by chance and I showed it to Julia. It has a good amount of twists and turns, and Julia said, 'maybe we should just make it.'"

Hall and Dreyfus are used to working together, but noted that this project allowed them to call the shots, which they are hoping to replicate on a future feature. "I've written other shorts about Paris," Hall said, "but then we realized that we can't really recoup our money making shorts, so we are going to do an independent feature, but keep the same group together." Hall also contributed a complimentary gush about the French capital where they shot their short over six days, calling it "the Buenos Aires of Europe."

As for Veep, Dreyfus apologized for the onslaught of posters around New York City at the moment promoting the new HBO comedy in which she plays a fictional vice president of the United States. She said the show's tagline is that the "buck stops somewhere near here," but noted also that it is decidedly non-partisan. "This is a show about political behavior," she said. "You'll never see the actual president, and you'll never know which party I belong to."