In an interview with EW, Lone Ranger co-star Johnny Depp explained the startling new look of his character, Tonto, who wears feathers and black and white face paint but, more importantly, has a bird sitting on his head. Inspiration came from a painting entitled "I Am Crow" by artist Kirby Sattler: "It seemed to me like you could almost see the separate sections of the individual, if you know what I mean," Depp said. Nobody knows what this means, but sure. WHAT ABOUT THE BIRD??

"It just so happened Sattler had painted a bird flying directly behind the warrior’s head. It looked to me like it was sitting on top. I thought: Tonto’s got a bird on his head. It’s his spirit guide in a way. It’s dead to others, but it’s not dead to him. It’s very much alive.”

Below: A look at the Sattler original, via the artist's official site: 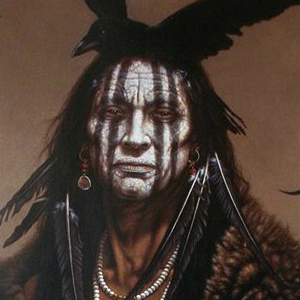