On 4/20, Revisit Dazed and Confused With the Criterion Collection 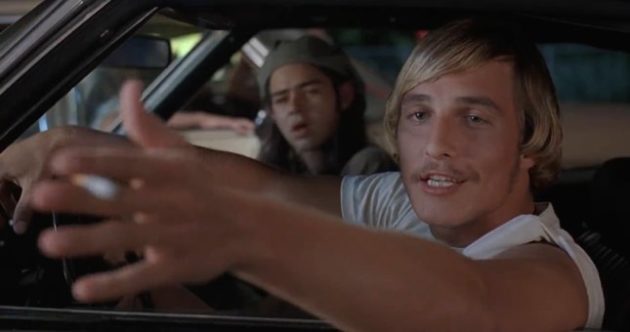 Dazed and Confused often gets lumped in with pot comedies and is celebrated on 4/20, but Richard Linklater’s first studio film transcends mere pot comedy and is still one of the most realistic teen movies ever made. It arrived at a time (1993) when teen movies were out of vogue, and it dared to take a trip down memory lane to a time remembered more with cringes than smiles. It’s arguably the most anti-nostalgia period movie ever, as acknowledged by Linklater himself. Digging in to the Criterion Collection extras (a Blu-ray Criterion release came out in October), here are some bits of evidence of that, tied to some of the movie’s most memorable lines.

"It’s the like every-other-decade theory, you know? The ’50s were boring. The ’60s rocked. The ’70s, oh my God, they obviously suck."
Linklater admits that teenage years are tough no matter what decade you’re in: “I can’t look back too nostalgically at this," he says. "It’s the only years you have. You’ve got no choice.” But the filmmaker looked around at teen movies that’d been done before and still wanted to tell his teenage rock ’n’ roll movie. Strangely, when asked about the ’70s in behind-the-scenes footage and cast interviews, many of the teenage actors came out of the film shoot having a favorable opinion of the decade. The core group of girls, who bonded offscreen — Parker Posey, Joey Lauren Adams, Christine Harnos and Michelle Burke — actually appreciated the wardrobe of bellbottoms and pants that jokingly required pliers to zip up. For a painful look back at what people wore in the ’70s, see also an audio-free, fairly eerie feature in which the costume supervisor dons many of the characters’ costumes.

"Wipe that face off your head, bitch."
The off-the-cuff line is spoken by fascist hazing ringleader Darla, played by Posey, after she tortures the new group of freshman girls on the last day of school. In one of the cast interviews, the actress says that the line was from a play she’d done and was a bad translation from German. She suggested the line to Linklater, and he was all for it. In the DVD commentary and making-of feature, Linklater likened working on his studio debut — for the mini-major Gramercy Pictures — to the initiation rituals that kick the film into gear. (A gleefully vicious Ben Affleck is Posey’s male counterpart.) The director references the bits he had to fight to include, like a simple “good game” hand-slap lineup after Mitch’s baseball game, that didn’t move the film forward but instead captured the dull essence of what life is like for a teenager. Of the pressure from studio executives, Linklater says: “At the end of the day, it was sort of my boxing match that makes or breaks you as a fighter, and I sort of survived it. I don’t know if I won or if there was a draw. I think I won.” 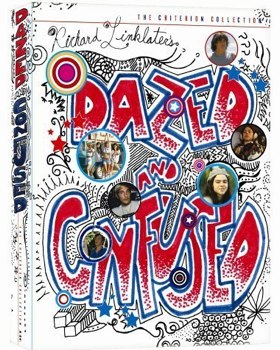 That’s what I love about these high school girls, man. I get older, they stay the same age.
The role of Wooderson, the skeezy older member of the pack, was a breakthrough for Matthew McConaughey, and the story of how he stumbled into the role is recounted in a couple of the film’s special features. Basically, McConaughey happened to be at the same Austin, Texas, hotel bar as casting director Don Phillips. They did some serious male bonding over a four-hour conversation, talking about everything but movies. When they got kicked out of the bar for talking too loudly, the wannabe actor proved himself so awesome — by calling the hotel to stand up for Phillips — that the casting director suggested he would be good for what was then a small part in the film. Of the “high school girls” line, one of Wooderson’s best, Linklater says in the director commentary, “It concerns me I could write such a line.” Of the character himself, the director admits that having the older but not necessarily wiser member of the group of friends was an essential teen memory for him. He cites the years before driving age when kids are at the mercy of anyone willing to chauffeur them around, and how peer pressure came into play in those cases.

All I'm saying is that if I ever start referring to these as the best years of my life, remind me to kill myself.
Perhaps the reason many critics complain that Dazed and Confused has no plot is that Linklater strove to capture the boredom of being a teenager: driving around, meeting up late at night back at the place you hate, your high school, because there’s nowhere else to go. In several of the extra features, the director recalls that viewers have told him the movie is just like their high school experience. He seems taken aback by it, though, because it does show a specific small-town Texas life that he survived, with characters that were composites of old friends. Those composites are the only cause for nostalgia in the movie. The friends who were a lifeline to sanity during high school are worth remembering. Similarly, in a bittersweet interview, local Austin actress Christin Hinojosa, who played freshman Sabrina, gives a teary interview toward the end of filming in which she talks about the friends she made the summer of the shoot, and how just like at the end of camp, they probably won’t stay in touch.