REVIEW: Zac Efron Muscles Up in Disposable The Lucky One 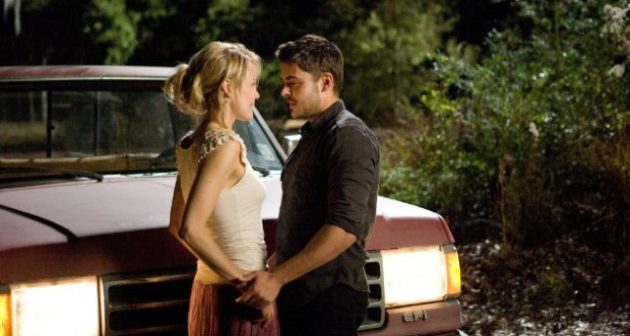 Nicholas Sparks. The name alone conjures up images of a romantic connection leaping between two people like an electric current, of fireworks illuminating the sky behind a couple canoodling at the side of a silvery lake somewhere and swearing they'll never be parted — except that she's dying of terminal amnesia and he has to leave tomorrow for an 50-year deployment in the Middle East, oh no!

Love means never having to say "I wasn't crying, my allergies just got really bad all of a sudden!" in Sparks's world, and that remains true for the latest adaptation of his work, The Lucky One, directed by Shine's Scott Hicks and starring Zac Efron and Taylor Schilling in a story as gauzily soft and disposable as the tissues the susceptible might need to pack. Efron plays Logan, a Marine home after three tours of duty and struggling through a sense of displacement and jolts of PTSD. One morning after a raid while he was still in Iraq, he spotted a photo on the ground and went to pick it up. The act took him out of the path of a bomb that exploded a few seconds later, one that would have killed him if he'd stayed put. After surviving a few more brushes with death, he came to believe that the picture, of a blond woman, was his lucky charm, and he vowed to find her in order to thank her.

He does this by packing up a duffel and heading out on foot with his dog, walking from Colorado to Louisiana in search of the (fictional) small town of Hamden, Louisiana, located in that region of the South — I'm sure you know it — in which it's perpetually golden late afternoon. He matched a lighthouse there to one in the background of the photo, and after a little asking around, he finds his way to a dog kennel owned by the cheery Ellie (Blythe Danner) and her granddaughter Beth (Taylor Schilling), a skittish single mom with a bullying ex-husband — and, of course, the "guardian angel" from the photo.

The Lucky One is filled with talk of destiny, much of it done by Efron in the opening and closing voiceover, but like any movie romance, it needs a complication to potentially keep its fated leads apart. In this case, it's the seemingly easily surmountable (it's no terminal amnesia) quirk that Logan "can't find the right words" to tell Beth why he's really there, and so instead takes a job at the kennel and begins winning her over with his kindness and rippling biceps. What will Beth do when she finds out? She'll get mad, but I'm honestly not sure why — maybe if he'd been carrying around a nude photo of her, or been keeping locks of her hair and smelling them compulsively, it'd be something to get creeped out about, but his explanation is pretty legitimately sappy.

Efron and Schilling play a Disneyland version of a traumatized veteran and an emotionally abused spouse, their emotional wounds salved by their time together during a courtship that consists of a lot of mutual ogling through windows and fixing of boats (not a metaphor). Logan also bonds with Beth's son Ben (Riley Thomas Stewart), a boy whose love of chess and playing the violin doesn't sit well with his demanding, tough-guy father Keith (Jay R. Ferguson). Efron isn't plausible as a battle-scarred soldier, but even without the fake tattoos he's no longer built like a tween heartthrob. While Schilling — in cutoffs or floral dresses, her hair in a messy ponytail — is treated with chaste deference by the camera (she first appears walking out of the light like a near-death vision), the film has no problems lovingly objectifying the newly buff physique of its male lead.

The Lucky One aspires to but never reaches the grandly melodramatic heights of the über-Sparks adaptation The Notebook, though a reconciliation embrace in an outdoor shower of some sort seems deliberately staged to evoke the earlier feature. The film can't with any conviction portray this as a great love, even on simplified and schmaltzified scale ("You should be kissed every day, every hour, every minute," Logan tells Beth) — Efron and Schilling simply look like two pretty people who are bound to get together because they both have the big blue eyes of a porcelain doll. Their problems are made to appear so mild, and the setting in which they live so idyllic that The Lucky One becomes numbingly pleasant, a cinematic anesthetic.

It may not be The Notebook, but The Lucky One does unintentionally evoke another cable-TV standard in its story of a zen-like wanderer, trying to leave behind a violent past, who comes to a small town, rents a run-down place to live and falls in love with a girl whose jealous ex has a lot of local power. It's Road House without, well, the road house. And instead of doing tai chi out by the water, Efron's character prefers, sensibly but less interestingly, to just walk.