And the Winners of Movieline's Cabin in the Woods Horror Haiku Contest Are... 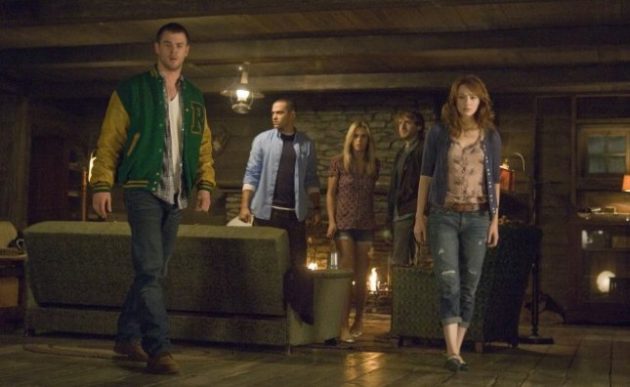 Thanks to all who played along in our epic Cabin in the Woods poetry contest! After careful deliberation over your many incisive and witty horror-themed submissions, Movieline's editors have selected the five best haikus of the bunch; read the winning selections -- all of which, yes, will receive that coveted Cabin in the Woods expanding bong -- after the jump. Cabin in the Woods spoilers follow, so beware!

Movieline pored over submissions from the comments section, on Facebook, and on Twitter, and selected one grand prize winner and four runners up to honor for their supreme tributes to the horror haiku gods.

Here's Andrew's winning submission -- a clever takeaway from Cabin in the Woods and really, a lesson to us all.

Ancient wisdom says:
Go check out the basement, but
Don't read the Latin.

Congrats also go to our four runners-up, who will be receiving t-shirt, a poster, and the Cabin in the Woods bong:

Ultimate horror
Is not zombies or clowns, but
Sigourney Weaver

Five teens in the woods.
Sex? Drugs? Sure. But don't forget
Killer unicorns.

Give all of our winners a high-five for their haikus. Put those prizes to good use, friends.