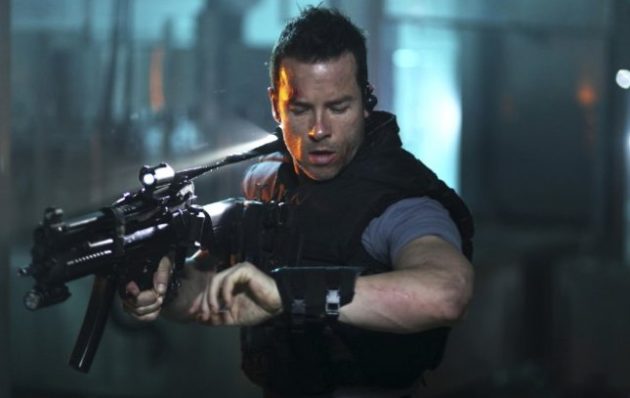 The sci-fi action flick Lockout, directed by first-timers James Mather and Stephen St. Leger from a script they wrote with Luc Besson, features a scene in which characters somehow skydive out of orbit through the stratosphere to land, neatly and not even a little on fire, on an urban road. It isn't a sequence of events I'd ever have dreamed I needed to see on-screen, but boy, was I glad to.

Gleefully preposterous, Lockout is packed with moments like that — its very setup, involving a maximum-security prison in space that the inmates take over, is a metaphorical out-of-orbit parachute jump. Anchored by a smirky Guy Pearce channeling John McClane via Snake Plissken, Lockout is derivative and ridiculous and a good time, provided you can turn off higher brain functions along with any other part of you that might want to lodge a complaint about liberal borrowing from better movies.

Pearce's is always a welcome face to see on-screen, but in Lockout he gets the rare opportunity to be funny. And he is, in the style of a deadpan, wisecracking '80s action hero — his character, Snow, is an agent who's falsely accused of murder along with something about the selling of state secrets. He's scheduled to spend a few decades in stasis on the experimental space jail MS One, the costs of which are being defrayed by a long-distance interstellar exploration company test-driving its cryosleep technology on a population no one's concerned about, even if it sometimes causes brain damage. Before Snow can be put under and ferried out to the big penitentiary in the sky, MS One crumbles with surprising ease after psychotic prisoner Hydell (Joseph Gilgun, hamming it up with a heavy Scottish accent that's almost incomprehensible) gets hold of a weapon. The other inmates are woken up and hostages are taken, one of them Emilie Warnock (Maggie Grace), the president's daughter, who was there on a humanitarian mission.

Who can possibly rescue her? Who? "We can send in one man," suggests a higher-up named Shaw (Lennie James), a laugh line though not a joke. (A little later in the film, a declaration that "He's my brother!" gets the same effect.) Lockout has no pretensions about being anything other than over-the-top hokum, but to its credit, it's neither winking nor smarmily self-aware — it's a straight-faced B-movie. And once all its players are in orbit, it becomes a brisk pursuit through the hallways and tunnels of MS One, as Snow sets out to save the target he's been assigned while also trying to track down his old partner Mace (Tim Plester) by getting the location in which he stashed a briefcase, the contents of which could clear his name.

Pearce is fun to watch, his character drawling out one-liners while demonstrating a cartoon-worthy near-indestructibility, a combo laid out in a nicely staged opening sequence in which he's being roughly interrogated and each punch he takes knocks his face out of the frame, only to return a little more bruised, bloodied and snarky. Grace can't keep up, though it's hard to say whether the problem belongs to her or her dialogue — Emilie's regulation flirty/angry banter with Snow upon meeting him involves her responding to every work out of his mouth with "You're a selfish dick!" or "asshole" or "obnoxious." (The film's approach to putting the rescued princess in her place has a needlessly mean edge — at one point, Snow sucker punches her in the face as part of a disguise to make her look tough.) Peter Stormare summons up some restrained weirdness as Langral, the government guy who doesn't trust Snow, and Vincent Regan is Alex, the self-appointed boss of the hijacked MS One.

Besson, who also served as Lockout's executive producer, leaves a few recognizable fingerprints on the film: Shot in Belgrade, it has his rootless, international feel, and when Emilie gets her hair cropped and dyed black as a disguise, she instantly transforms into one of his signature steely waifs. But the overwhelming inspiration is John Carpenter's Escape From New York — sometimes Lockout seems to be paying tribute to it, other times just ripping it off. The world of Lockout is a similarly dystopian future in which the White House is now an armored bunker and crime has gotten bad enough to necessitate a 500,000-capacity multinational space jail, and the film shares an underlying disillusionment with social structures, with Emilie, in this case, getting taunted for acting high-minded in the face of the obvious special care she's being given because of who her father is.

But Lockout doesn't actually have anything more ambitious on its mind than being entertainment, and while Mather and St. Leger are sometimes overly hurried (an early set piece involving a chase through a hotel, onto a road and down to the subway might be impressive if it weren't so visually garbled), they manage just fine once the film makes it to MS-One. Lockout's a weightless bit of galactic debris that fills an hour and a half just fine — you may not believe a man can parachute out of space, but wouldn't you like to see him try?