Let's Decipher Adam McKay's Hints About the Plot of Anchorman 2 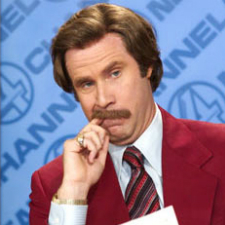 Since Will Ferrell dropped the late-night bombshell that Anchorman 2 was a go the other week, the world's been wondering: What has Ron Burgundy been up to since 2004's Anchorman? Speaking with AM760/Salon, co-writer/director Adam McKay dropped a few hints about the sequel, which is currently being scripted. "I don’t want to give away too much, but I’ll just give a couple pieces of ideas that we’ve kicked around. Keep in mind we’re still writing the story, but I’ll say one phrase for you: custody battle. I’ll give you that. I’ll give you one other one: bowling for dollars." So... any guesses?

It has been eight real world years since Ron wooed his lady co-anchor Veronica Corningstone with his sweet jazz flute stylings circa 1975, so assuming the same amount of time has passed in Anchorman years it'd make sense if they now have a little Burgundy running around. Mind you, this is pure speculation, but just think about that for a second: A MINI RON BURGUNDY. YES PLEASE. Maybe the pressures of co-hosting World News Center drove a wedge in Ron and Veronica's relationship and they're fighting over their kid, Kramer vs. Kramer-style and the only way to get his family back is with... bowling?

That's all I've got with so little to go on. So have at it, Movieliners; what could Ron Burgundy be up to in Anchorman 2 -- and what would you like to see from him and the rest of the Channel Four News Team?