Exclusive Book Excerpt: How A Terrible Script for Prince's Purple Rain Became The Best Rock Musical Ever Made

It's been called the greatest rock musical ever made, the movie that launched Prince into the mainstream consciousness: 1984's Purple Rain. The semi-autobiographical story of a Minneapolis musician known as The Kid and his struggles with success, love, and an abusive father -- told as much through Prince's tortured swagger as through iconic chart-topping songs like "When Doves Cry" and the titular "Purple Rain" -- struck a chord with audiences and earned Prince an Oscar for Best Score to boot. But, as recounted in an exclusive excerpt from John Kenneth Muir's book Purple Rain: Music on Film, the film was headed for the rocks until neophyte director Albert Magnoli dared to tell Prince the truth about the film's initial script: "Well, I think it sucked."

Muir chronicles the history and lasting impact of Purple Rain in his new tome, on shelves today, from Prince's early quest to find the right film vehicle for himself to his collaboration with director Magnoli in making drastic changes to screenwriter William Blinn's original script (then called Dreams) -- a script that, Magnoli and producer Robert Cavallo say had been passed over by countless directors. Also included: What happened when Prince subsequently put himself in the director's chair for Under the Cherry Moon (1986) and Graffiti Bridge (1990), Tipper Gore's infamous shock over the lyrics to "Darling Nikki," and considered analysis of the themes and symbolism that make Purple Rain resonate.

In Movieline's exclusive excerpt, Magnoli recounts his first, insightful encounter with Prince and how he pitched the shy artist on the story that would become Purple Rain. The film's lore has long held that Purple Rain's story originated from Prince himself -- but according to Magnoli, it was destined to be a much different film before he stepped in.

Reprinted with permission of the publisher, Limelight Editions, an imprint of Hal Leonard.

The next task at hand was to introduce Magnoli to Prince, and simultaneously, for Magnoli to further familiarize himself with the artist, his background, and his works. Magnoli knew and had liked the 1982 Prince hit singles “1999” and “Little Red Corvette.” He held a powerful image of the artist as “a loner” and “iconoclastic,” but more research was still necessary to get an authentic feel for the man and the performer.

So, while he finished an editing job on a Wednesday and Thursday and prepared for a flight to Minneapolis on Friday to meet his movie’s star, Magnoli wanted to learn everything he could about the musician. “I didn’t know his early career,” Magnoli acknowledged.

“‘Send to the editing room every video and any foot¬age you have on Prince, so I can see the visuals,’” Magnoli remembers saying to Cavallo on the phone. “So he sent me all of this video of Prince in concert in Minneapolis, and it was during his bikini-wearing, high-heel wearing, long coat days. This was prior to the 1999 album, where I think he had his self-titled album Prince . . . I think that’s what it was called. He was wearing a jacket on the cover [of the album] with a bikini bottom, with his chest sticking out, looking very androgynous.

“So now I’m watching all this video that supports this androgyny, and I’m thinking, Wow . . . okay. . . . I realized trying to bring Prince to the public—and I always knew I wanted to cross over from an urban base to a wider one—was going to be difficult,” Magnoli explains.

“So I’m watching all this imagery, but I do see the vulnerability under all that crap, and I think, Okay, I need to focus on that,” he notes. “That’s where this is coming from anyway.”

An encounter on the way to the airport didn’t exactly quell Magnoli’s concern that the visuals surrounding Prince might have difficulty playing in Peoria. He asked his African American cab driver on the way to LAX if he knew of the performer/songwriter Prince. The man did know of him, so Magnoli next pressed the gentleman on what he thought about him.

“Don’t forget,” admonishes Magnoli, “we’re back in 1983 now. Nowadays it’s not even an issue. We’ve come a long way, baby. But now I’m thinking, All right . . . more . . . stuff. But when I later met him, I realized, no, this is not even an issue. This is just the noise. This is just the chatter. I never factored it in, ever -- ever -- from that point on. The frills didn’t bother me. The purple coats didn’t bother me. This was all the stuff, all the chatter, that anybody who didn’t know the soul would just latch on to. And they were going to do that anyway. As long as I could stay focused on the heart and soul, I knew I would be fine.” 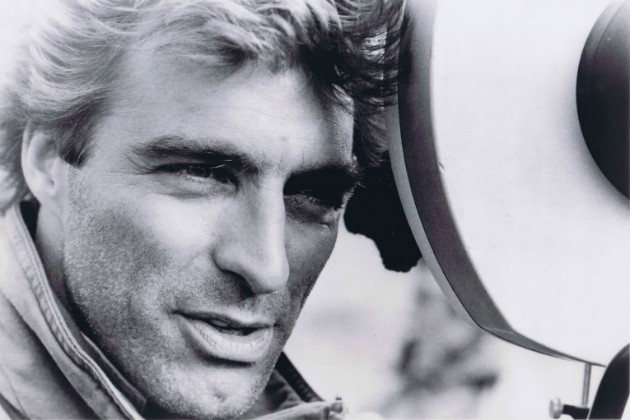 Albert Magnoli, from the archive of John K. Muir

When Magnoli arrived in Minneapolis late in the evening, he met Steve Fargnoli, who promptly informed him that his new story was off and the Blinn story was back on. Fargnoli -- whom Magnoli sometimes jokingly referred to as “the second part of a three-part series,” approached him with grave seriousness.

“The first words out of his mouth are: ‘Understand this: I don’t give a damn about the story you told Bob [Cavallo]. We’re doing the story that’s already written.’ And I said, ‘Uh huh.’”

Then Magnoli was taken to actually meet with Prince. In a hotel lobby, Magnoli first met Chick, Prince’s legendary, Nordic bodyguard, whom Magnoli described as a very “tall, Viking-looking person,” and then went off to a corner to observe the dynamics of the situation.

“To my right were the elevator doors,” Magnoli explains. “To my left, across the lobby, was the front door of the building, where Steve [Fargnoli] and Chick were positioned. Then the doors opened at the crack of midnight sharp and out walks Prince by himself.

“Because he didn’t know who I was, he didn’t see me. He saw Chick and Steve at the end of the hall and walked to them, which allowed me to do a right-to-left pan with Prince, unencumbered by him knowing I was looking at him. As a result, I ended up filling [in] the whole story based on him walking across the lobby. Because what I saw was extreme vulnerability, in spite of all the bluster and the costume and the music. This was a vulnerable young man. I saw all the heart and soul. I saw all the emotional stuff. I saw the tragedy of his upbringing. I just saw stuff and felt stuff that filled in the three-act story.”

Together, Prince, Magnoli, Cavallo, Fargnoli, and Chick went to a working dinner. “I was looking at Prince and I could tell he didn’t like being looked at,” Magnoli says. “He’s very shy. Everybody ordered food, and as soon as the waitress left, Prince looked at me and said, ‘Okay, how did you like my script?’

“I realized a few things there. One, he said, ‘my script,’ which meant that he had personally invested himself in whatever it was that William Blinn had written. And two, that he hadn’t been told anything that I felt about it.”
“The words that came out of my mouth were the following: ‘Well, I think it sucked.’”

Magnoli pauses for dramatic effect. “At that moment, Steve dropped his head, Chick leaned closer to me, and Prince looked startled. Then I could see him thinking and what he was thinking was: ‘I wasn’t told this before this meeting was to take place. Why wasn’t I told?’ Then he looked toward Steve, because obviously Steve had told him nothing. That look to Steve took about three seconds, but it was telling to me, because now I saw how the operation worked. He had been kept in the dark about this.”

“So then Prince looked back to me and said, ‘Why does it suck?’ And I said, ‘You know what, it’s not important why, but here’s what we can do about it. Let me tell you the story.’ So now, with even more passion, because I have more information now that I’m looking at this kid, I told this story.

Not knowing exactly what was going to happen, Magnoli remembers feeling a little uncertain. Had he offended Prince? Had he made him angry?

“We got in his car; he got behind the wheel, I got into the passenger’s seat, and he took off fast,” Magnoli notes. “The next thing I knew, we were driving in pitch-black darkness, [with] not a light in sight. I had no idea where we were. It looked like we were driving in a black tube. A day later I realized we were in horizon-to-horizon farmland, but there were no lights. So I was thinking, He didn’t like the story . . . and now I’m dead. I can die right now. and no one will know. . . .”

This nighttime ride was not the beginning of a murder plot, however, but the start of a very fruitful working relationship for Magnoli and Prince. Even though the story Magnoli had recounted involved the lead character (Prince himself, hereafter called “The Kid”) being at odds with his parents, his bandmates, and even his girlfriend, Prince never once flinched from a warts-and-all, three-dimensional presentation.

“And he said, ‘I’m willing to take that hit.’ So that was it, metaphorically, realistically, and literally. Because he does get smacked by his old man in the movie.

“And then I jokingly said to him, ‘There isn’t a person on the planet who wouldn’t want to hit a rock star in the face,’” Magnoli continues. “And he laughed and said he understood that. We both understood that the image of these people as entitled and selfish was a target. We understood that.

“We never discussed warts and all. It just became part of the script and it was totally embraced,” Magnoli explains.

When interviewed some time later, Prince reflected on the seemingly biographical aspects of the Magnoli script. “We used parts of my past and present to make the story pop more, but it was a story,” he emphasized.

Purple Rain: Music on Film is available in stores today.