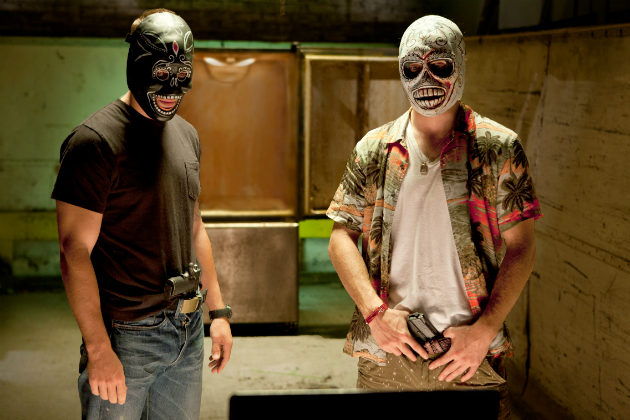 Why would a Berkeley grad weed dealer and his ex-Navy SEAL partner take on a Mexican cartel who wants in on their business? To get their kidnapped shared girlfriend back, of course! Since said shared girlfriend is Blake Lively, I can understand why Aaron Johnson and Taylor Kitsch would risk life and limb to fight off Salma Hayek's gun-wielding goons. I'm not quite as sold on why Oliver Stone would make a movie like this, but after watching the trailer for Savages, hell -- I'm in.

Let's catalogue all the things in the first trailer for July 6's Savages, which debuted on MTV, that are intriguing:

- Aaron Johnson's UC Berkeley white boy dreads, which I might otherwise find unappealing if they weren't on him and only for like 5 seconds

- (Side note: I went to Cal and I never once encountered a pot dealer who looked like Aaron Johnson. Sigh.)

- The return of California surfer-outlaw chic -- are skeleton hoods the new President masks?

Verdict: Bring on the Johnson-Kitsch sandwich.

Savages is adapted from Don Winslow's novel, with a script penned by Winslow and Shane Salerno.

Laguna Beach entrepreneurs Ben (Johnson), a peaceful and charitable Buddhist, and his closest friend Chon (Kitsch), a former Navy SEAL and ex-mercenary, run a lucrative, homegrown industry—raising some of the best marijuana ever developed. They also share a one-of-a-kind love with the extraordinary beauty Ophelia (Lively). Life is idyllic in their Southern California town…until the Mexican Baja Cartel decides to move in and demands that the trio partners with them.

When the merciless head of the BC, Elena (Hayek), and her brutal enforcer, Lado (Del Toro), underestimate the unbreakable bond among these three friends, Ben and Chon — with the reluctant, slippery assistance of a dirty DEA agent (Travolta) — wage a seemingly unwinnable war against the cartel. And so begins a series of increasingly vicious ploys and maneuvers in a high stakes, savage battle of wills.