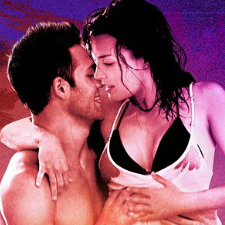 Here's a last bit of breezy entertainment as you head into the weekend: The first trailer for Miami-set dance sequel Step Up 4, AKA Step Up: Revolution, in which a new pair of star-crossed lovers leads their crew into syncopated battle against evil land developers. This series has wound a long, glossy path since the days of Channing Tatum b-boying in the parking lot, but hey: It's a new Step Up movie! As long as that Moose kid and Madd Chadd show up, I'm good to go.

Of course, Jon M. Chu has moved on from the Step Up films to helm the G.I. Joe sequel (Chu directed the second and third installments of the series, making the franchise a hit) but he remains a producer with music video veteran Scott Speer in the director's chair. (Speer previously directed the "Duet" episode of Chu's online dance series The LXD, which inspires some faith in his eye for movement and storytelling.)

My biggest hangup about Step Up 4, however, isn't that the two new leads, Kathryn McCormick and Ryan Guzman, are unknown -- following in Step Up tradition -- or that the trailer is almost too-slick looking, or that dancers on pogo legs don't really do much for me. It's that flash mobs are so tired already; once Justin Timberlake used them to woo Mila Kunis last year and Howie Mandel hosted a reality TV show about real people springing grandiose flash mob-gestures upon their estranged loved ones, I was kind of done with them.

Also: What is Peter Gallagher doing in this movie playing the evil real estate developer who will threaten to dash the community's dreams before being defeated by the power of dance?? He was in Center Stage 1 AND 2! YOU'RE ONLY ALLOWED TO BE IN ONE DANCE FRANCHISE, OTHERWISE THE UNIVERSE IMPLODES!!!

Verdict: Seems like a missed opportunity to open Step Up 4 in 4-D, but I'll give it a whirl anyway because yes, I am a sucker for these movies.

Step Up: Revolution Against Peter Gallagher opens in theaters July 27.