James Franco, Selena Gomez, and Harmony Korine are down in Florida filming Spring Breakers, a movie about four coeds (including Disney tween queen Gomez) indebted to a rapping dealer named Alien (Franco) after they rob a bank to finance their spring break trip and he bails them out. All of this sounded innocent enough, at least as much as a Korine film can seem, until images of Franco emerged from the set. Some called his look Kevin Federline-esque; rapper Riff Raff stepped forth to actually claim, proudly, that Franco's cornrowed, blinged-out drug dealer persona was based on him. In any case, get a look at your 2011 Oscar nominee James Franco as... I don't even know what to call this. Movieliners, caption away! 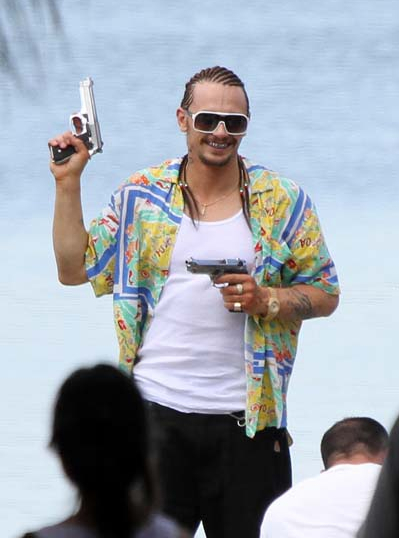 Here's a bonus look that confirms that this isn't just a shared psychotic Friday afternoon daydream we're all having, posted by Gomez to her Twitter account yesterday with the message "This is where the trouble begins..." (The shoot is being heavily documented both on Tumblr and Twitter, for those interested in candid shots of Gomez, Ashley Benson, Rachel Korine, and Vanessa Hudgens in bikinis.) 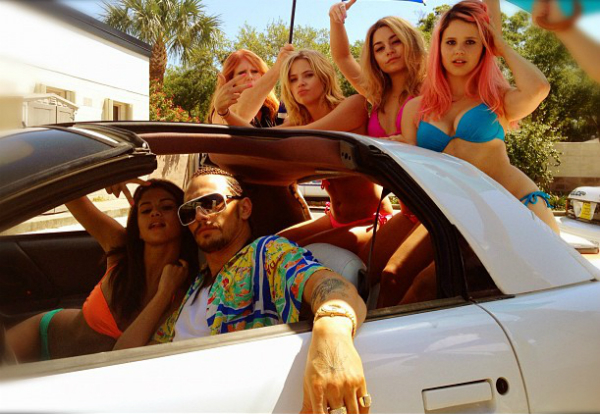 Meanwhile, Fuse TV got Riff Raff on the line to explain that he was originally offered a part by Korine before Franco came to adopt his style in the film, which also supposedly stars Gucci Mane, AKA that rapper with the ice cream cone tattoo on his face:

"I sent him a few things. But all you gotta do [to see how I dress] is search through my videos. I got a pretty distinct style, with the braids, the jewelry." Damn. Somewhere in Florida, where they're shooting Spring Breakers, at this very moment, James Franco looks exactly like this.

On the movie as a whole, Riff Raff said, "I feel really kind of privileged because I got this big actor playing the role of me but at the same time, like, damn, I wish I was there...

Sure thing, Riff Raff. In other words: This is my new most-anticipated movie of 2013.