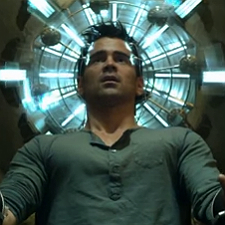 Again with this "teaser for a trailer" business. If you cannot wait until Sunday to get a glimpse of the actual trailer for Len Wiseman's Total Recall remake, here are thirty seconds of Colin Farrell driving flying cars and jumping off of balconies and Kate Beckinsale looking hot. I'm still holding out for evidence that Wiseman kept the three-boobed lady in his version, which will determine if this rehash of the 1990 sci-fi gem gets my ticket dollars or not.

I mean, at least the ridiculously short 15-second Breaking Dawn Part 2 teaser trailer teaser had pecs and hands and Edward Cullen and stuff. Show me the alien boobs, Wiseman!

The full trailer will air on ABC on Sunday during the first half of the Celtics-Heat game before an extended version debuts online at Apple.

Total Recall is an action thriller about reality and memory, inspired anew by the famous short story “We Can Remember It For You Wholesale” by Philip K. Dick. Welcome to Rekall, the company that can turn your dreams into real memories. For a factory worker named Douglas Quaid (Colin Farrell), even though he’s got a beautiful wife (Kate Beckinsale) whom he loves, the mind-trip sounds like the perfect vacation from his frustrating life – real memories of life as a super-spy might be just what he needs. But when the procedure goes horribly wrong, Quaid becomes a hunted man. Finding himself on the run from the police – controlled by Chancellor Cohaagen (Bryan Cranston) – there is no one Quaid can trust, except possibly a rebel fighter (Jessica Biel) working for the head of the underground resistance (Bill Nighy). The line between fantasy and reality gets blurred and the fate of his world hangs in the balance as Quaid discovers his true identity, his true love, and his true fate. The film is directed by Len Wiseman. The screenplay is by Kurt Wimmer and Mark Bomback and the screen story is by Ronald Shusett & Dan O’Bannon and Jon Povill. The producers are Neal H. Moritz and Toby Jaffe.