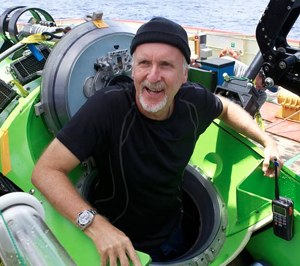 In a milestone of human civilization right up there with landing on the moon and eating 68 hot dogs in 10 minutes, James Cameron reached the deepest point on the planet on Sunday — the Mariana Trench, nearly seven miles below the surface of the Pacific. Naturally, upon reaching bottom, he did what any record-setting blockbuster deep-sea diver would do: Tweeted.

Back from trip to deepest pl on Earth -#oceans hadal zone.Puts a new spin on "to hell and back". Good to see the sunshine. #deepseachallenge

It wasn't all good, according to a report today from Cameron's partners at National Geographic:

The expedition was designed so that Cameron could spend up to six hours collecting samples and video at the bottom of the trench. But his mission was cut short due in part to a hydraulic fluid leak that coated the window of the sub's "pilot sphere," obscuring his view.

"I lost hydraulics toward the latter part of dive, and I was unable to use the manipulator arm," Cameron said this morning [...] Considering the daunting task of sending humans into the deep, such technical glitches are to be expected, Cameron emphasized: "It's a prototype vehicle, so it's gonna take time to iron out the bugs."

And even with the hydraulic leak obscuring the explorer's vision, word has it that the ocean floor looked better than Titanic 3D.