4 Things Friends With Kids Can Teach Hollywood About Adult Comedy 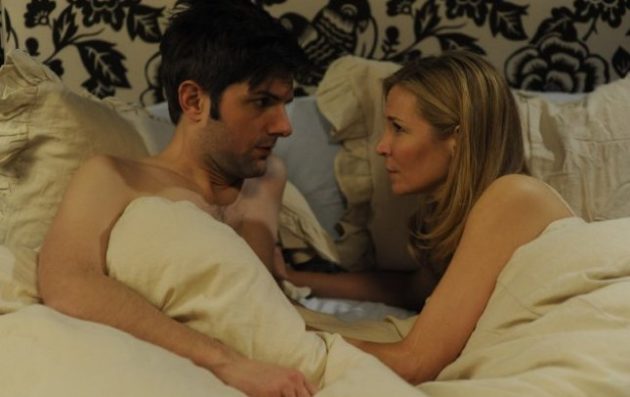 For an independently produced comedy that mostly revolves around adults talking to each other — sometimes with child accessories — in varying degrees of inebriation, Friends with Kids is finding a modest amount of success. It’s not perfect, but somehow it manages to be funny without any accidental drug trips, grandmas shooting guns at the dinner table, or Tom Cruise rescuing Cameron Diaz from a crashing plane. Writer-director-co-star Jennifer Westfeldt has returned us a bit to the days of comedies of manners, instead of the awful dichotomy between shrill “romantic” comedy and Apatovian gross-out comedy where Hollywood seems stuck these days. In that spirit, here are four lessons future adult comedies should take from Friends with Kids.

1. Skip (most of) the bathroom jokes.
Bridesmaids it isn’t. While there is one major on-screen poop joke in Friends with Kids, it actually made me breathe a sigh of relief, because at least we didn’t have to see the bodily function in action. As soon as Megan Fox walked across from a baby with “explosive diarrhea” — diaper ominously absent — I started dreading seeing an explosion in her direction. Hence my gratitude, and surprise, when it never came. (This is an admittedly low bar — eventually I’d love to see Adam Scott or Kristen Wiig in a romantic comedy that ignores the bathroom altogether — but hey, small steps.)

2. Write romantic comedies about the occasional decent human being.
Sure, Scott’s Jason spends most of the movie as a Barney Stinson-like asshole, but the story ultimately hinges on his growing up. I wish Westfeldt had given her Julie a little more to do, but she’s at least a relatively sensible woman who, when rejected by the person she loves, moves away and tries to move on. Even the protagonists’ respective Ms. and Mr. Wrong, played by Fox and Edward Burns, are written with a bit of sympathy. Compare that to most of the romantic comedy heroes in recent memory — Natalie Portman’s poorly characterized commitment-phobe in No Strings Attached and the all-around loathsome denizens of Something Borrowed and How Do You Know come to mind, not to mention anyone played by Katherine Heigl – and it was a pleasant change to actually understand and sympathize with the characters of Friends with Kids.

3. Sex can be funnier off-screen.
For a story that revolves around adults trying to procreate while maintaining their recreational sex lives, most of Friends with Kids’ sex was more heard about than seen. Which was great. Sure, there are ways to make sex funny on-screen, and I laughed at the awkward bedroom machinations when Jason and Julie tried to conceive their child. But my apparently universal Adam Scott crush aside, I didn’t feel cheated by the lack of nudity. That scene and other references to sex in Friends with Kids were funnier, sharper and more adult than most of the shenanigans in last year’s dueling sex-friends rom-coms, No Strings Attached and Friends with Benefits.

4. All you need is a good dinner party or two.
As you may have read, Friends with Kids is not the much-marketed Bridesmaids reunion, but the returning cast plays a great collective supporting role. The actors have good chemistry as a group of friends, with all the tensions and alliances therein, and some of the best parts of Friends with Kids depict their various gatherings, including a climactic, verbally-explosive dinner party during a group vacation. Westfeldt’s characters argue like real people, and the drama of those arguments powers her story – no need for rogue hot-air balloons, incompetent bounty hunters, or even spy partners fighting gun battles over Reese Witherspoon.

PREVIOUSLY: What Wanderlust — and Hollywood — Just Can't Get Right About Women