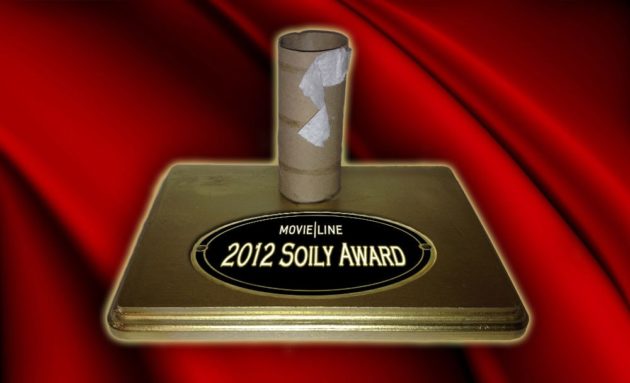 It's on! Responding to yesterday's unveiling of the inaugural Movieline Soily Awards, an eagle-eyed commenter pointed out this brief note posted to the Golden Raspberry Awards official message board — a reply apparently from "Head RAZZberry" John Wilson himself:

"Many a RAZZIE® imitator has come and gone during the 32 years we've been doing our awards. And looking over their category names and choices, I've gotta say the so-called 'Soilys,' [sic] with their fixation on excremental terminology and their categories with names few American publications would even touch (let alone publish) look likelier to join the 'gone' list than make the brief roster of our 'competitors' who've stood the test of time..."

Wait — so is he saying that we're not going to get the Shit-the-Bed Award written up in USA Today? Who knew? Anyway, Wilson or his representative or whoever brings up a crucial element of the awards that we did omit: SOILIES® looks so much more dignified, no?

We also seem to have forgotten to charge folks to vote. Oops. Next year!

Read more about the 2012 Soilies here, and drop back by tomorrow for our Reader's Choice launch!