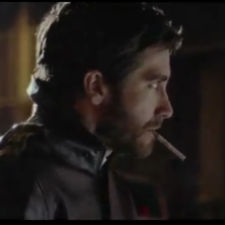 Jake Gyllenhaal has played along the edge of creepy (Donnie Darko) before, but he hasn't gone full psycho -- until now. After the jump, watch Jakey-poo put that dead-eyed visage to great use as a troubled, tightly coiled young man who kills his hipster pals and strangers alike until he finds just the right... dance club. Eh, it's a music video for a band called The Shoes. I'll allow it.

The video, directed by Daniel Wolfe for the Shoes single "Time to Dance," reminds me a lot of this year's Sundance thriller Simon Killer; both follow charismatic sociopaths as they stalk their prey, using stylistic flashes and tricks to evoke their character's mental state.

Warning: Some startling violence within.

What do you think -- who's ready to see Gyllenhaal tackle characters like this in the movies? (*Raises hand*)