'A Complete and Utter Lie': The Fact, Fiction and Fury Behind John Carter's Woes

With John Carter currently drawing both mixed reviews and potentially catastrophic early box-office returns, Movieline today revisits our conversation with director Andrew Stanton and producer Lindsey Collins about the film's troubled back story — and what they and Disney really have to lose. - Ed.

A trade report last month suggested that Disney’s March sci-fi tent pole John Carter was in serious trouble owing to Pixar vet Andrew Stanton’s relative inexperience directing live-action film, citing rumors that production reshoots and late-game rejiggering had bloated the budget from $200 million to as much as $300 million. Speaking with press Thursday, Stanton called the report “a complete and utter lie,” insisting that he stayed on time and on budget – but it’s easy to see how the Pixar way of moviemaking may have made for a bumpy transition for the filmmaker.

John Carter, adapted from Edgar Rice Burroughs’s Barsoom sci-fi/fantasy series (created in 1912), introduces a hero and world that influenced many an iconic property that followed, from Star Wars to Avatar; Stanton, a lifelong fan of the series, makes his live-action directing debut with the pic which combines live-action and CG to create an entirely new world on which its titular hero (Taylor Kitsch) finds himself a stranger in a strange land populated by eight-foot tall, four-armed aliens and fantastical creatures.

The scope and detail of John Carter’s alien world and its inhabitants is ambitious, which is both the draw and the risk. The Hollywood Reporter’s Jan. 19 report cited insiders close to the production and talent in its assessment calling the costly Disney actioner out as being plagued with various problems stemming from Stanton’s inexperience with live-action filmmaking. “Industry sources with links to the project believe it might lead to a staggering write-down,” wrote Kim Masters, portending doom for the ambitious potential trilogy-starter.

At the film’s press junket, Stanton and Co. were eager to refute the rumors. “I want to go completely on record that I literally was on budget and on time the entire shoot,” Stanton said. “Disney is so completely psyched that I stayed on budget and on time that they let me have a longer reshoot because I was such a good citizen, so I find it ironic that we’re getting accused of the opposite.”

That said, Stanton and producer Lindsey Collins confirmed that the process of hammering out the John Carter story was a long and laborious one even after a first cut of the film was submitted. Collins, a Pixar producer who worked with Stanton on WALL-E, described it as a learning process for translating the Pixar way of doing things into huge-scale live-action filmmaking – first working out the basics, then moving around the pieces until a satisfying film falls into place. 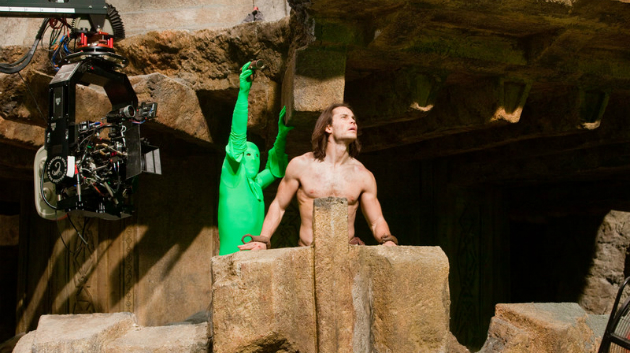 “It’s the way we’ve always worked and certainly at Pixar that’s how we work – we get it all up there and put it up and we watch it and go, ‘That’s not working, let’s move that over here,’" she said. "So it doesn’t surprise me at all that that’s how Andrew worked on this one."

That process has resulted in stellar storytelling at Pixar, where films are famously developed and worked over for years with seasoned teams of writers and animators before coming together. The problem comes when that way of working is applied to a project like John Carter, in which live-action footage must first be shot with actors against green screen, sent off to VFX houses to be merged with CG environments, creatures, and effects, and then returned in order to even begin the editing process.

Because of his background, Stanton was involved in the animation process more than many directors might have been. The level of involvement was unusually demanding of visual effects vendors who were working on various moving parts with the director, according to Collins. “[Stanton] himself was drawing in all of these draw-overs," she said, "because when you shoot that stuff 90% of it’s not there. He’s actually cut together these shots of Taylor, by himself, acting to nothing. Andrew was like, for us to be able to look at it narratively I have to be able to draw in these other characters that should be there. It was the only way that we could watch it as a narrative film and see what’s working and what’s not, ‘That’s dragging or that’s playing too fast’ or ‘I don’t understand what’s happening here.’”

As reported by THR, even after putting together a first cut Stanton was rewriting major character arcs and story sequence. The lead female character of Martian princess Dejah Thoris, played by actress Lynn Collins, wasn’t quite as strong initially as she is in the final cut, according to producer Collins. Stanton then rearranged key character reveals and scenes — nothing new or shocking to any filmmaking process, live-action or otherwise, but a process that could become incredibly demanding of resources if story was still being hammered out after principal photography.

Meanwhile, rumors of skyrocketing budgets aren’t the only issues facing John Carter, which opens March 9. Poor tracking numbers and audience confusion about the project are also concerns Disney is trying to address in the weeks leading up to release. The film’s title, for one, was changed from John Carter of Mars to John Carter to avoid too much of a science fiction/genre association to general audiences, but the truncated title now leaves those unfamiliar with the Burroughs book scratching their heads wondering what John Carter is about. Despite a great initial trailer, subsequent spots have lent too much of a Star Wars feel to the proceedings, and the studio is scrambling to convey that the John Carter of Mars tale isn’t derivative of many of the genre properties of the last few decades, but is in fact the series that spawned many of them.

But while nobody’s talking yet in definitive terms about sequels, Stanton’s already prepared to continue; he’s already outlined a full trilogy, filtering the entire John Carter saga down from eleven books, and last week delivered a 25-page outline for the first sequel.

[This piece was originally published Feb. 17 on Movieline.]