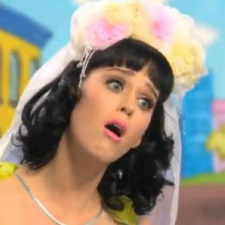 This is real: Paramount is in talks with Magical Elves to direct their Katy Perry 3-D concert documentary -- as in Magical Elves, the producing duo comprised of Dan Cutforth and Jane Lipsitz, who previously produced the Paramount smash Justin Bieber: Never Say Never in addition to creating reality TV "classics" like Project Runway and Top Chef. The film will follow the singer on and off-stage, with Footloose director Craig Brewer also onboard to executive produce. The question is, can Perry bring the star power and fan adulation that drove predecessors Never Say Never and Michael Jackson's This Is It to huge box office returns -- or will it take some fairy-esque magic to translate Perry's candy-colored pop persona into movie gold? [THR]