Friends With Kids the Best Bridesmaids Reunion That Never Was 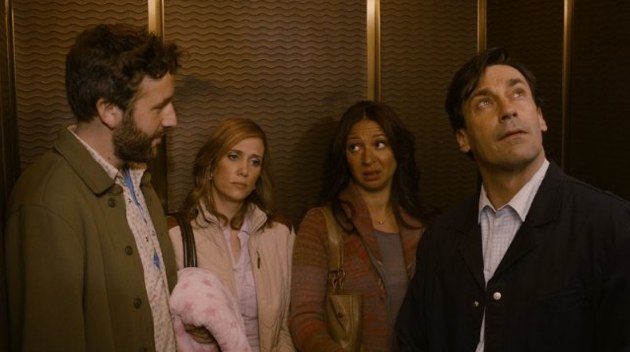 Stephanie Zacharek's review pretty much confirmed this, but! For the record, Dear Consumer: "The advertisements emphasize the Bridesmaids pseudo-reunion, making it look like it's a rollicking comedic romp with Kristen Wiig, Jon Hamm, Maya Rudolph, and Chris O'Dowd all just giggling and making silly faces. [...] Those four, the Bridesmaids folk, they really don't have much to do other than pop in every 20 minutes or so to comment on the action, a sort of Greek chorus surrounding our two heroes. It's also worth noting that none of them is actually funny, by design. You know that scene you've seen the commercial where Wiig and Hamm sneak out of the restaurant bathroom, post coitus? That's in the first five minutes of the movie, right before a 'Four Years Later' insert. Wiig spends the rest of the film crying into various glasses of wine while Hamm yells at her. It's a real laugh riot." [Deadspin]