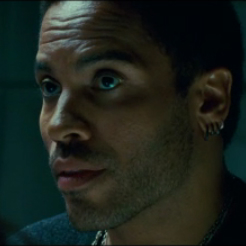 It's the start to a pivotal relationship in The Hunger Games saga: Newly minted tribute Katniss Everdeen (Jennifer Lawrence) meets her Capitol-assigned stylist, Cinna (Lenny Kravitz), who will help her put on a brave, fierce face for the media circus leading up to the televised deathmatch known as the Hunger Games. Watch the two meet in a promising clip from the March 23 release and chime in: Does this scene bode well for the franchise-launching adaptation?

In this scene, Katniss has just arrived inside the walls of the Capitol, the flourishing city that houses the 1 percenters of Panem, where each District's young tributes train and prepare for their battle royale. Every District is assigned a stylist to prep them for the televised promotional appearances that fuel spectatorship of the Games, and Cinna is hers and Peeta's.

Lawrence continues to impress as Katniss, played with a slightly dark, slightly wary sense of intelligence. But I particularly love what Kravitz does here with Cinna; he underplays the character's ambiguous sexuality just so, capturing a surprising canniness and awareness. Kravitz's Cinna comes off as more strategist than stylist, which is how Suzanne Collins wrote him in her novels, but there's a warmth in his interactions with Lawrence. And I dig the restraint in his gold-flecked make-up -- also straight from the books -- especially in comparison with Effie Trinket's harajuku clown getups. By all indications, not too shabby for his second acting turn to date.