The 9 Most Scathing Critical Responses to Project X 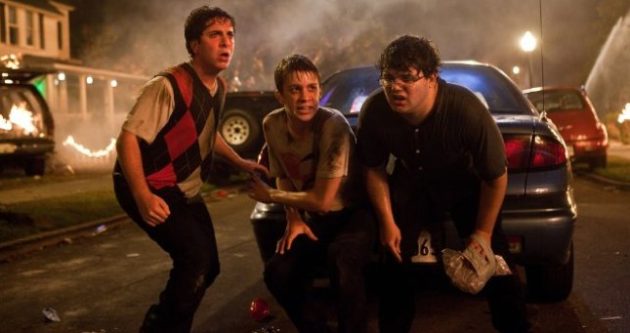 The reviews are in for the Todd Phillips-produced uber-party comedy Project X, and three out of four critics agree: It is the douchiest, most mean-spirited debauch of the year. (To date, anyway; we'll see what kind of revisionist zest Steven Spielberg and co. bring to Lincoln.) Hop aboard Movieline's scorched-earth golf cart and let's go for a spin...

9. "You’ve got to hand it to Warner Brothers and producer Todd Phillips: They have painstakingly engineered the perfect film for today’s attention-impaired audiences. Are you a texter? A talker? Have at it. There is no way you could make this movie stupider or more pointlessly noisy than it already is." — Sara Stewart, NY Post

8."It would be easy to say Project X objectifies women, if the word 'object' didn’t imply too much dignity." — Keith Phipps, AV Club

6."Project X’s title has no bearing on its premise: a teenage house party in a quiet Californian suburb that spirals out of control. Nor is it connected to the 1987 film of the same name in which Matthew Broderick rescues a band of tormented chimpanzees, unless perhaps the chimpanzees wrote it. [...] Overall, it’s flamboyantly loathsome on every imaginable level, and a great many unimaginable ones besides." — Robbie Collin, The Telegraph

5."[Oliver] Cooper’s brash, bragging Costa, in particular, is the most annoying movie character since Jar Jar Binks. You’d never tire of punching him. [...] Let’s take all prints of the film, and bury them. Don’t bother marking the spot with an X." — Chris Hewitt, Empire

4."How bad is it? It kicks off the proceedings with the soundtrack blaring the 2 Live Crew classic 'Hey, We Want Some Pussy,' and that winds up constituting the closest that it comes to both quiet dignity and quality writing. [...] It is so bad that it deploys a running gag featuring shenanigans involving a pet dog that even Michael Vick might take offense at." — Peter Sobczynski, eFilmCritic

2."Project X is classless, mean-spirited, repugnant, deplorable, off-puttingly sleazy, and thoroughly contemptible. It is also searingly depressing — there isn't a true laugh in sight — as well as worthless on every cinematic level one could name, imagine, or dream up." — Dustin Putman, DustinPutman.com

1."[A] certain self-justifying, feel-good impulse compels the filmmakers to imply that, even if [the characters] do nothing further of note in their lives, they'll always have this. Herein lies the film's lack of point-of-view, leaving it to the viewer to decide if the import of the evening is a joke, a tragedy, an irony or a victory. Despite a couple of unconvincingly upbeat tacked-on moments at the end, Project X basically reads as nihilistic, as not believing in or standing for anything. Not even fun." — Todd McCarthy, The Hollywood Reporter