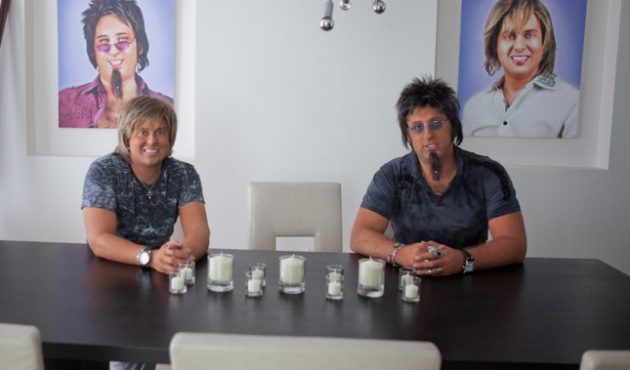 As any meander through the movies that have their origins in Saturday Night Live sketches will demonstrate, comedic ideas that work in the short form do not necessarily a funny feature make. You have your Wayne's Worlds, sure, but then you also have your Night at the Roxburys and It's Pats, interminable variations on the same joke dragged out longer than anyone either watching or on the screen wanted. The comedy of Tim Heidecker and Eric Wareheim, creators of Tim and Eric Awesome Show, Great Job!, might as well come from a different galaxy as those SNL bits, but Tim and Eric's Billion Dollar Movie has at least one thing in common with The Ladies Man — neither demanded nor benefits from the leap to the big screen.

I should confess I arrived late to Tim and Eric. I only delved into their Adult Swim series after seeing the film, the opposite direction of the likely viewers for the Billion Dollar Movie, which will go over best for established fans; at this year's Sundance premiere, the numerous walkouts of those presumably new to and displeased by the pair's work included people who actually shouted invective at the screen on their way out. This didn't seem to faze the directors/writers/stars, who clearly thrive off of a certain adversarial relationship with their audiences. Like the pair's shows, Tim and Eric's Billion Dollar Movie revels in a kind of aggressive anti-humor, with its fetishistic pleasure in home-video-worthy production nonvalues (edits that come a beat too soon or too late, frames that freeze on grotesque expressions, odd, deadpan line delivery), its distorted take on genre conventions, its love of low-level corporate ephemera and an utterly nonsensical plot. The picture is tonally and stylistically consistent with what they've done for TV, but those episodes run 11 minutes. Tim and Eric's Billion Dollar Movie is an hour and a half long, and at that point having no apparent long-term arc, big ideas or forward momentum isn't silly. It's a giant middle finger to anyone who sticks around until the credits roll.

At the story's (if you want to call it that) outset, Tim and Eric are at a disastrous screening of a film they just completed and for which they were inexplicably given a billion-dollar budget by the Schlaaang Corporation. Among the problems with Diamond Jim: It's only three minutes long, it stars a Johnny Depp impersonator who was accidentally hired instead of Johnny Depp, it's set in a terribly unconvincing excuse for Paris and its filmmakers are on the hook for the money they frittered away on things like makeovers for themselves and actual gemstones. Desperate, they take a job they see advertised on television, in which a slightly Satanic man named Damien Weebs (Will Ferrell) offers a billion dollars to anyone who can manage the Swallow Valley Mall and Pizza Court. Our heroes rename themselves Dobis PR (from "Doing Business"), rid themselves of their orange skintones, blinding dental work and cheesy goatees and set off for parts unknown for their awfully convenient new gig.

There is something to admire in how very not eager to please Tim and Eric's Billion Dollar Movie is. As if to remind you of how meaningless everyone you're watching is, the film is even broken into by segments entitled "Understanding Your Movie" in which people reenact, in the style of corporate training videos, themes that have nothing to do with what's come before or what follows. The mall the pair takes over turns out to be a near-feral situation, filled with wolves and oddball store tenants, providing a convenient excuse for a series of sketchlike encounters. There's a balloon stand run by Katie (Twink Caplan), with whom Eric is obsessed after glimpsing her in a commercial; there's a sword salesman (Will Forte) who does better business getting paid not to sell his wares; there's a used-toilet-paper seller whose son Tim forcefully adopts; and there's a healer who uses "the power of Shrim," which seems to involve a lot of feces.

There are no lessons to be learned, no hearts to be warmed, just absurdity piled on absurdity with the occasional non sequitur and gross-out bit thrown in. Zach Galifianakis, Jeff Goldblum, John C. Reilly, Ray Wise and others turn up in small roles, and the film crescendos into an extra-ridiculous shoot-out ending. But all that weirdness isn't enough to make up for the fact that Tim and Eric's Billion Dollar Movie is not actually very funny or even engaging to sit through. It's a collection of random ideas and reactions against the expected, not an actual entity unto itself. The only watchable moment, really, is the opening, which offers fake Schlaaang production company logos before launching into a faux commercial hosted by Jeff Goldblum, who introduces himself as "Chef Goldblum." It's touting the Schlaaang Super Seat, an extreme parody of theatrical experience-enhancing products like D-Box seats and Smell-O-Vision, and it's an amusingly warped take on how corporations try to improve the entertainment experience. But considering the movie that follows, it stops seeming so ridiculous — you really need chemical aids to be able to sit through something so unabashedly half-assed.