WATCH: Will Lindsay Lohan's Comeback Begin with This SNL Promo? 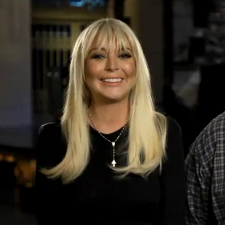 I won't waste space rattling off a list of the personal and professional troubles that have plagued Lindsay Lohan's life and career in recent years, so let's cut to the chase: Will her Saturday Night Live hosting gig this weekend -- her fourth time on the show after some admittedly hilarious prior turns -- show the world that La Lohan's ready to mount a comeback? Watch a healthy-ish-looking Lohan vaguely touch on her well-documented absence from glory in her SNL promos after the jump.

- Am I the only one transfixed by the plasticized morphing of her face from the face I thought she had?

- Seriously, I know Kenan Thompson is in this bit too, but I can't. Stop. Staring. At Lohan.

- Linds-sanity! What would Ben & Jerry put in that flavor of ice cream?

- Glimmers of the comic timing I remember seeing in Lohan long ago. Encouraging!