What Wanderlust — and Hollywood — Just Can't Get Right About Women 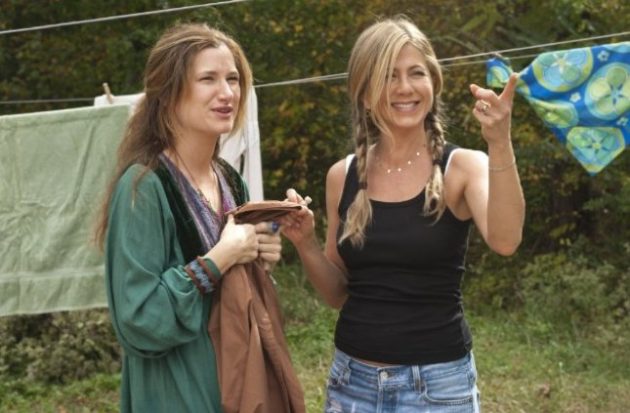 Fully-certified flop Wanderlust might have sold a few more tickets if it had actually done anything remotely interesting with Jennifer Aniston and the rest of its talented female cast. It’s obviously not new that Hollywood doesn’t quite know what to do with comedic actresses (see also Faris, Anna). But it is a little sad in the wake of Bridesmaids’ commercial success – and its Oscars cameo over the weekend – that the rest of the film industry still. Doesn’t. Get It.

I did enjoy parts of Wanderlust, when I could peer around all the lazy, tiresome clichés about How Women Act – but it would have been so easy to avoid them! So as a service to writers and female audiences everywhere, here are five suggestions for how to write comedy roles for women that are better than what Aniston had to make do with in Wanderlust. (Spoilers and feminism ahead.)

1. Stop using us as Eve.
Bridesmaids was really good at creating drama out of its characters’ own bad decisions – they screwed up, they suffered the consequences, they (sometimes) figured out how to fix things. Wanderlust just blames Aniston’s poor Linda for everything. First she convinces her husband to buy a West Village apartment they can’t really afford – a plan that fails so spectacularly that the couple has to flee New York for, shudder, suburban Atlanta. Then she convinces her husband to stay in the hippie commune with free love, rampaging nudist men, and no doors on the toilet. Ensuing marital problems? Mostly her fault! “I drank the Kool-Aid,” she tells Paul Rudd’s George during their tearful climactic reunion. His better instincts to avoid the commune, its peyote and the bared abs of Justin Theroux are all vindicated, of course.

2. Write age-appropriate characters for protagonists older than 31.
Don’t get me wrong, Aniston looks fabulous. I want her wardrobe and her legs. But she’s already played an unemployed 30-something unsure of what she wants to do with her life – six years ago, in Nicole Holofcener’s much sharper Friends with Money. By now both Aniston and the 42-year-old Rudd seem a little too old to play young Manhattanites still figuring out what they want to be when they grow up. And it would be funnier if Linda really embraced the hippie commune life after leaving a steady or rewarding job, not just because she doesn’t have anything better to do with her time. Maybe it’s just the looming prospect of my own 30th birthday and all the significance that’s supposed to have, but watching the 43-year-old Aniston still trying to “pick a major,” as her husband says during an argument, was just depressing. Like watching Private Practice.

3. Give us some friends!
Come on, this is pre-Bridesmaids – the entire Sex and the City franchise succeeded by understanding that women like talking to, crying to, and criticizing other women. But Wanderlust weirdly goes out of its way to avoid giving Linda any family, friends or visible non-marriage relationships she can turn to in a crisis. After George loses his corporate bonus-slave job, we’re told that the couple’s fate is dire – so dire that staying with his loud, racist brother is apparently their only viable option (at least until the commune appears on their GPS). At no point is any reference made to any sort of connections Linda might be able to turn to. Wanderlust couldn’t get Catherine Keener to film one scene as an icy careerist sister silently disappointed in her unemployed younger sibling? Or at least make a reference to Linda’s wealthy parents, who lost everything with Bernie Madoff? (You don’t get to be 43 and still picking a major without having spent your adulthood on some serious family financial support.)

4. Character development means more than taking off our shirts.
Despite the rumors, we do not see Aniston’s breasts in Wanderlust. We’ll just have to make do with her implied breasts. And in the final overall film, yes, there are probably many more manly bits than lady parts visible on screen. That still doesn’t change the fact that Linda’s major triumph as a character is flashing a TV camera crew, in a “protest” move that was dated by the time she was born.

5. Hot women tend to appreciate hot men, or at least cute men, or at least men who have a passing acquaintance with shampoo.
Real-life relationships notwithstanding, Aniston really gets the short end of the free-love stick in Wanderlust. George wants to take advantage of the commune’s partner-swapping rules and sleep with blonde, freshly-laundered Malin Akerman, who’s popped by from a Self magazine cover shoot. Linda reluctantly agrees and succumbs to the shirtless charms of Theroux. He may be dashing in real life, but unfortunately for Linda and female audiences everywhere, he spends most of the movie looking like a squirrel crawled atop his head and died. And really, doesn’t equality start with eye-candy?