REVIEW: Appalling Act of Valor is Having a War, And Everybody's Invited 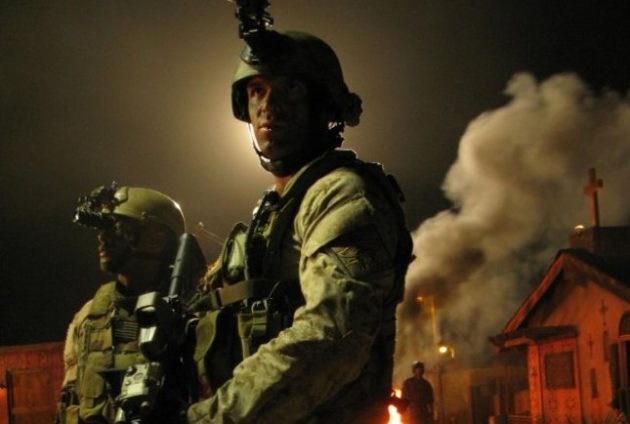 Well, it finally happened. The line separating America from America: The Movie found a way to arrange itself into a stick figure and walk off the scene in disgust. In Act of Valor, an elaborate branding exercise for the U.S. Navy SEALs in the form of a Hollywood action blowout, the two mingle freely and openly at last.

The movie opens with a statement from directors Mike McCoy and Scott Waugh. They describe the importance of casting real Navy SEALs — “the greatest action heroes of them all,” according to the film’s press notes — to give the film that much-desired feeling of “authenticity.” It was all for us, McCoy and Waugh agree. They wanted to show the audience what it really feels like to fire an automatic weapon and burst someone’s head open from 50 feet away.

And so they dragged two chiseled specimens (uncredited, they appear as “Dave” and “Rorke”), out of active duty and in front of the camera and had them perform in a really bad war movie. Act of Valor was produced with an unprecedented level of Pentagon cooperation. Four years ago, when the film was conceived, the Navy was looking for 500 new recruits, and a movie seemed like just the thing. Top Gun famously boosted recruitment by 500 percent, and the military now uses popular entertainment vehicles to make its pitch as a matter of course. America’s Army, the 2002 video game created by the military to mimic war games like Call of Duty, now seems like a strategic part of the run-up to the Iraq war.

So by “the audience” McCoy and Waugh mean American boys. And the goal of showing them how it feels to be a SEAL means combining the aesthetics of war they know from movies and gaming with the exhilaration of showing off actual American might. And yet there is a larger “us” addressed by the thickly written narration (the script, by 300 screenwriter Kurt Johnstad, gives new meaning to the phrase “fog of war”). All of Valor is designed to emphasize the direct impact of military action on American safety, from the opening rescue of a female CIA agent (Roselyn Sanchez) who is being tortured to within an inch of her life (and the integrity of her tank top) in the Costa Rican jungle to the interception of high-tech suicide vests making their way to major American cities.

The plot might be summed up this way: America’s having a war, and everybody’s invited! Everybody, oddly enough, except Iraq and Afghanistan. After an unexplained explosion kills an American diplomat and a whole mess of children in Manila, we meet a SEAL platoon on a San Diego beach, where they are preparing for deployment. “Chief Dave” has already passed his Tom Brady genes on to five kids; “Lieutenant Rorke” is about to have his first child. Being a dad comes up a lot. They never turn to each other between kill shots and swap parenting tips, but if they did it would fit right into the script’s awkward attempt to jam characterization into these two beefy avatars. You can’t help thinking these guys got hosed: All that lethal know-how and they’re bested by dopey dialogue.

A lack of continuity, both within and between scenes, makes a fairly simply set-up weirdly difficult to follow. The bad guys are childhood friends Abul Shabal (Jason Cottle), a Ukrainian convert to Islam who is mad about Chechnya, and Christo (Alex Veadov), an arms dealer with unclear motivations. But they are desultory villains, there to provide minimal narrative hinge action. The bigger story is that we are battling a global enemy with weapons connections and no respect for their own lives or the lives of anybody else. From the Philippines and Costa Rica we stop in Somalia, Mexico, and parts of Eastern Europe, and they hate us everywhere. We also have a couple of enemies within our borders: “the media” and “the economy” are cited as key allies in any terrorist plan to take down the United States.

Each location provides a stage for some serious military peacocking: The opening rescue has some thrilling shots of an amphibious operation — boats dropped from helicopters! — and the surfacing of a nuclear submarine is so colossally breathtaking it’s hard to believe it’s not an act of nature. Much gadgetry is wielded to no discernible purpose, and at almost every stop live ammunition discharges like a five-cent slot machine on somebody’s lucky night. But there is little sense of how these teams work and strategize together, all the stuff that might actually make for an interesting story.

The finale is a first-person-palooza on the Mexican border, a crescendo of incoherent carnage that requires one of the SEALs to perform his own death. The sacrifice and ceremony of that performance is most unsettling when it penetrates the protective layer of numbness that builds up over the course of any movie with a body count this high. It's nearly impossible not to respond, but the casual blending of reality and Hollywood cliché finally feels ghoulish, a disservice to those it is meant to honor. Yeah, it’s just another movie with things blowing up in highly realistic fashion, and yet it embodies the insidiousness of a culture seduced by sensation and jingoism. Because although the last decade of war has done much to convince us otherwise, this country is not a movie we are watching, and people really do die in the end.