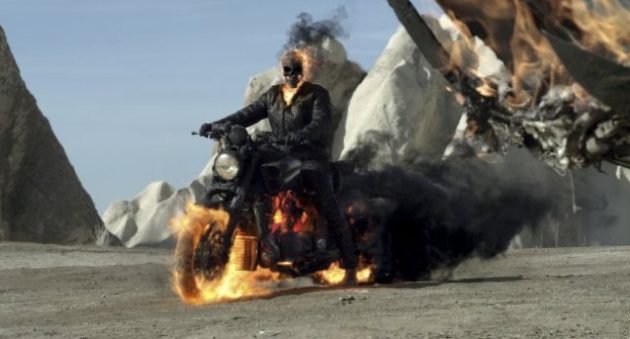 When you're not going to win on points, you may as well try to shoot the moon — that seems to be the thought process behind Ghost Rider: Spirit of Vengeance, the sequel to Marvel's 2007 Ghost Rider. Realizing that their stunt rider who turns into a flaming skeleton-monster character and their star who turns in what are less performances than performance art were unlikely to result in a film that could be thought of as good in any traditional sense, the studios have aimed instead to make something that embraces its own lunacy.

To oversee this endeavor, they brought in Mark Neveldine and Brian Taylor, the directing duo behind the Red Bulled-out, always in motion Crank films, who ignore a good portion of what happened in the first Ghost Rider, plant their tongues firmly in cheek and loose Nicolas Cage to do his strangest. It's not as wild or as fun as it may sound (or that it needs to be to hit the midnight-movie sweet spot for which it aims), but it's a minor improvement on the unintentional silliness of the initial installment.

Ghost Rider: Spirit of Vengeance moves the action to Eastern Europe, where sinister forces are trying to capture 13-year-old Danny (Fergus Riordan) for use in the fulfillment of a doomy prophecy. The kid and his mother Nadya (The American's Violante Placido) have been in hiding with the first of two sects of tough monks (the first is overseen by Anthony Head, the second by Christopher Lambert), until they're chased down by a group of mercenaries led by her ex, Carrigan (Johnny Whitworth) who've been hired to bring the boy to become the new vessel for Roarke (Ciarán Hinds), the living embodiment of Satan (look, I don't make this stuff up). An alcoholic French priest (Idris Elba) recruits Johnny Blaze (Cage) to help save the pair using his Ghost Riderly powers with the promise of curing him of the curse, though Blaze fears he won't be able to control the demon that possesses him enough to not also devour the people he's trying to save.

Cage plays Blaze as a tweaker, a twitchy, shaky mess who pops skull eye whenever he struggles to control his inner monster. It's a performance that starts off as awkward but gradually builds to new arias of weird; threatening a flunky from whom he's trying to get information, he notes that the Rider is "scraping at the door! He's SCRAPING AT THE DOOR! If you don't TELL me what he needs to KNOW, I'm going to let him oooooooooout!" Cage jerks and flinches and laughs maniacally — in one of the more memorable shots, a camera affixed to the front of his motorcycle holds on him as he accelerates, cackling, through town, gaping black eye sockets warping his face and then getting tamped down. Neveldine/Taylor have apparently gotten Cage to also play the transformed Rider this time around, an addition that comes through in the demon's odd head tilts and dancey fits. Cage is given a run for his money by Elba (who uses his character's accent as one might use a swirling cape) and Hinds, who have a ham-off in their respective roles, though Cage emerges triumphant just from the sheer effort he puts into the role.

Ghost Rider: Spirit of Vengeance scores some deliberate laughs — the Rider spins inexplicably in mid-air after getting shot by a bunker buster, a character who can make things decay with his touch finds the only thing that doesn't crumble in his hands before he eats it is a Twinkie, and at long last the question of what happens when the Ghost Rider needs to pee is answers (it's "like a flamethrower") — but the smugness of the film grows wearying long before the end. Just because the people on and behind the camera are willing to acknowledge what we're watching is ridiculous crap doesn't really change the fact that, well, it is. For filmmakers as talented as Neveldine/Taylor are (and they are, as the exhilarating freedom of their camerawork attests), it's a letdown, evidence that all the air quotes in the world won't make your end project any better if there's nothing sincerely good thrown in there as well.