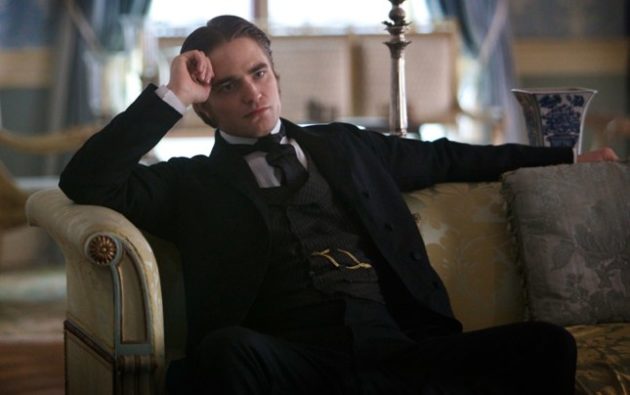 Poor Robert Pattinson: The weight of proving himself, in a movie that doesn’t have the words “Twilight” and “Saga” in the title, is shaping up to be heavier than a vampire’s curse. In last year’s Water for Elephants, he had a charming naivete, a seemingly natural shyness that was wholly inoffensive, if not exactly memorable. And as social schemer Georges Duroy in Bel Ami, playing here at the Berlinale out of competition on the festival’s next-to-last day, he works harder to redeem himself than any actor should have to: He applies a scowl from Column A with an eyebrow furrow from Column B to express displeasure; Smirk No. 4 denotes a moment of extreme hubris. The effect is like watching an athlete trying not to break a sweat – you might want to root for him, but there’s a part of you that just wants him to let it all out already.

What is it about the guy? Under the direction of first-time filmmakers Declan Donnellan and Nick Ormerod, who have directed mostly for the London stage, Pattinson isn’t half-bad. He doesn’t overreach, which perhaps saves him from embarrassment. But he expends so much energy in his desire to be subtle that he’s the exact opposite of subtle — yet he doesn’t just go all the way and take the performance over the top. Duroy is a fellow of modest means, rattling around Paris bedding the women of influential men to increase his own wealth and power. (The movie was adapted, by Rachel Bennette, from Guy de Maupaussant’s second novel, and it’s a foamy — if somewhat snoozy — bit of picturesque entertainment.)

The problem may be that the women around Pattinson run circles around him. They’re the ones you remember, from Uma Thurman’s politically astute Madeleine Forestier, to Kristin Scott Thomas’s mouselike, aging skinny-minny Virginie Walters, to Christina Ricci’s Belle Époch sexpot Clotilde de Marelle. Pattinson, despite the fact that his character is trying to dominate these women, looks a little afraid of them: Perhaps paradoxically, he has more erotic wattage when he’s playing wan Victorian valentine Edward Cullen, his character in the Twilight movies. Here, in his stiff collars and glossy top-hats, he looks like a very lean bird dressed up for dinner, only he’s the one on the plate.

I’m wondering how an actor like Pattinson, a guy who’s had so much teenage longing projected onto him he’s practically a walking piece of fan fiction, can ever unravel the tight knots of his own self-consciousness. Or if he can. Watching him in Bel Ami, I found myself hoping he’d rally, looking for subtle glimmers of awareness that might suggest he knows he’s supposed to make us believe he’s a cad, not just act like one. He’s trying so hard — why can’t he use those lizardlike eyes, that cat-that-ate-the-canary smile, in the service of making us forget who he is? Maybe it’s because he can’t forget who he is. And that’s the stiffest, tightest collar any young actor can wear.

This is my last post from Berlinale 2012, and here at the tail end of my 10 days here, I’m looking back on all the pictures I wanted to see and didn’t: Bunches of critics were shut out of the crowd-funded Nazis-in-space spoof Iron Sky when it screened late last week; I also missed the much-lauded Marley, directed by Kevin MacDonald, which I hear is an elaborate and involving portrait of the late singer and musician’s life. But there’s no use lamenting the ones that got away. If I can rally for a 10:30 p.m. screening tonight, I might be able to catch Tsui Hark’s Flying Swords of Dragon Gate. Saying good-bye to Berlin with a bit of 3-D craziness doesn’t sound like a bad idea at all.

Read all of Movieline's coverage of Berlinale 2012 here.