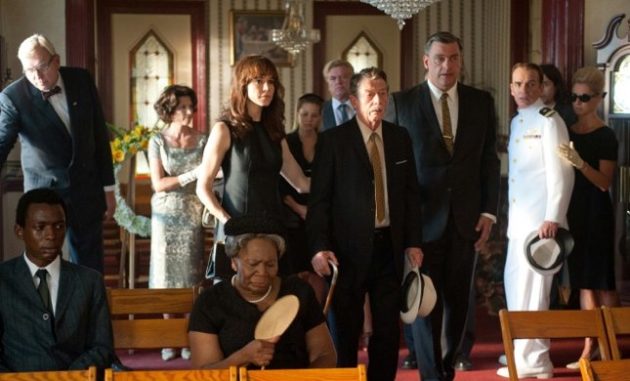 Billy Bob Thornton’s Jayne Mansfield’s Car, screening in competition here at the Berlinale, is a sprawl of a movie, wonderful in some small, intimate ways but confounding when you step back to look at the bigger picture.

This is a multi-generational family story set in late-1960s Alabama: A curmudgeonly patriarch, played by Robert Duvall, learns that his ex-wife, who’d long ago decamped to England to marry another man, has died; he’s forced to open his home to the second husband (John Hurt) and his two children when they arrive in the United States for the funeral. Duvall’s three sons, all veterans of the second World War, include Robert Patrick, who served but never saw action; Kevin Bacon, who worked as a medic and now, at the height of the Vietnam War protest, has become a pot-smoking peacenik; and Thornton, a former pilot whose mind has been addled by his wartime experience. Duvall also has a daughter, played by the gifted actress Katharine LaNasa (who may be best known for her work on TV shows like Big Love), a flirtatious blonde who feels she sometimes gets lost in this family of strong and/or confused and/or ineffectual men.

In fact, there’s a lot of “and/or” in Jayne Mansfield’s Car. (The title refers to the wrecked vehicle in which the Hollywood bombshell died in 1967, which makes its way to Duvall’s town as a morbid curio.) Thornton and cowriter Tom Epperson try to cram in so many relationship dynamics that the ensuing conflicts begin to lose significance. Duvall resents Hurt; Duvall’s sons all resent their father. Characters have crushes that amount to nothing, to the point where you wonder what these developments are even doing in the story. And while these disparate family members have been brought together by a death, no one, not even her own children, has much to say about the woman who has just died – she’s a screenwriter’s device in a handy casket. It doesn’t help that the three brothers, particularly Bacon’s character, are weirdly anachronistic for World War II vets. In 1969, most of those guys weren’t smoking pot or otherwise acting like petulant teenagers; at around age 50, they would have been, or would have been expected to be, certified grown-up men.

This is the first picture Thornton has directed in 11 years – the last was the 2001 comedy Daddy and Them – and he isn’t fully in control of this messy, unfocused material. But he does have some terrific actors in his corner: Hurt and Duvall, in particular, are great fun to watch. But what struck me most about Jayne Mansfield’s Car – and it’s the single biggest reason to see the movie – is Thornton’s performance.

This is the part that actors who work as directors usually mess up: They can’t direct themselves. (There are notable exceptions, of course, like Orson Welles or Laurence Olivier, but who wants to try to measure up to them?) Yet Thornton is so relaxed here, and so believably befuddled, that your heart reaches out to him. There’s something extremely vulnerable-looking about Billy Bob: That too-big head on that too-skinny body (which now, at middle age, also features a slight, real-live-person paunch, as opposed to chiseled movie-star abs). He’s superb in an awkwardly tender seduction scene with Frances O’Connor (who plays his late mother’s English stepdaughter) – he stands before her literally and figuratively stripped down, his emotions distilled into something so intense and beautiful that it’s almost painful to watch.

I suppose, after playing a scene like that, an actor-director could easily enough watch the playback and say, “Yep, that works.” But can Thornton himself really see how wonderful it is? Particularly in the midst of a movie that, scene for scene, doesn’t really work? Maybe the performance comes from a place where objective assessment recedes and instinct takes over. However it happened, it’s a small, sturdy miracle.