Berlinale Dispatch: The Taviani Brothers — Who? — Return with a Great Shakespeare-in-Prison Movie

There were many happy faces among critics on Saturday, the third day of the Berlinale. Because despite what I wrote yesterday about the criticism the festival has faced in recent years, particularly in terms of the films chosen for competition, nearly everyone I’ve spoken to thinks this year’s festival is off to a promising start. Of the six competition films that have been screened so far, not one has set any of my random sampling of critic friends howling with derision, or walking around wearing a perpetual scowly-frowny face.

When the festival lineup was announced, friends who had to write pregame assessments had a hard time finding even one or two movies that, sight unseen, had the potential to stand out. But on the strength of what we’ve seen so far, it appears that the best of this festival, whatever that might be, will again come from left field, as it did last year with Asghar Farhadi’s A Separation. Not every edition of every festival starts out that way, with a sense of adventure and anticipation. Don’t quote me yet, but we may be onto something special here.

We can attribute part of the buoyant mood to the reception of the screening of Paolo and Vittorio Taviani’s Caesar Must Die on Saturday morning. In the late 1970s and early 1980s the Taviani Brothers rode high, on an internationally cresting wave, with pictures like Padre Padrone and The Night of the Shooting Stars. But in recent years, mentioning their name would be likely to elicit a blank stare or a “Taviani Who?” Even though the brothers have been steadily making films in Italy since then, they’ve dropped off the map in the United States, and even at home their profile hasn’t exactly been blazing.

But Caesar Must Die may reignite the fortunes of this octogenarian directing team. The picture is stark and alive in its simplicity; rendered mostly in black-and-white, it’s gorgeous to look at -- you could practically use it as an illustrated textbook on framing and composition. Caesar Must Die is a sort-of documentary that tells the story of a group of prison inmates -- incarcerated at Rome’s maximum security Rebibbia -- who mount a production of Shakespeare’s Julius Caesar. Footage from the actual performance frames the picture: In the opening scene, we see a bunch of stubbly, rough-looking guys, wearing simple, stylized costumes that give the whole affair the aura of a children’s holiday pageant, doing some pretty interesting things with Shakespeare’s language. Not all of those things are, in the strict sense, good. But even the “bad” actors among this bunch -- and remember, they’re not just nonprofessionals but convicted criminals, for Christ’s sake -- contribute to the intense, quiet power of the final work.

Most of Caesar Must Die is devoted to watching these men work their way through the material during rehearsal, learning its ins and outs, its dips and dives, and teasing out nuances and details that mean something to them. Sometimes the Tavianis draw the parallels between art and life a little too starkly. We don’t really need to hear the inmates reflecting on how Julius Caesar speaks to them when we can see how, in their proto-method-acting way, they bring every scrap of their experience to rehearsal: They touch each other warily but tenderly; when it’s time for a character to draw a knife, you can tell the actors respect it as both a weapon and a symbol, even though it’s presumably made out of plastic. You can bet these guys know a lot about duplicity and betrayal and power struggles, and they bring all of that to bear as they tangle with this challenging material, and with each other.

The most wonderful sequence in this overall very fine picture may be the montage of the actors’ auditions, as they meet with the play’s director – a professional brought in from the outside – and try to impress him with their swagger and capacity for pathos. Many of them have both in spades. Some are awkwardly touching; others come off like they’ve spent too much time channeling Robert De Niro; and some are simply naturals, able to summon that deep-rooted whatever-it-is that makes magic happen in live performance. The picture also features a lovely, haunting Bernard Herrmann-inflected score -- in places I could hear shadows of Taxi Driver. When Caesar Must Die eventually shows up in American theaters -- and it will -- it’s going to be easy as pie for marketing people to sell: An uplifting story about prison dudes finding meaning in art can pretty much sell itself. But even though that line essentially describes what happens in Caesar Must Die, it doesn’t come close to capturing the simultaneously joyous and mournful resonance of the picture. Caesar Must Die is really just about the way art lives on through people, sometimes in unlikely ways. There’s no way to keep it behind bars. 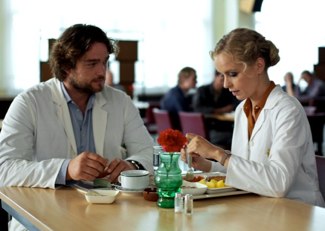 Saturday’s press screening of Barbara, from German director Christian Petzold, didn’t draw the same kind of rapturous audience affection that Caesar Must Die did. But then, it’s a very different type of movie. In Barbara, a beautiful but rather blank-faced young doctor – played by the superb German actress Nina Hoss -- arrives in a small East German town to take a new job at a tiny hospital. She doesn’t seem too happy to be there, though clearly the doc in charge – Ronald Zehrfeld, who somewhat resembles Brendan Fraser and is equally charming -- takes an immediate shine to her. It’s 1980, as the movie’s press notes tell us, though if you go in cold, you probably won’t be able to immediately discern when and where the action is taking place. That’s probably intentional, and the approach works. This isn’t The Lives of Others, where the East-West divide is practically a major character; instead, it’s just a story about people living in constrained (and at times dangerous) circumstances and yearning for something more.

Barbara is a drama and a romance, and it’s also laced with dry, delicate humor. There were times when the German members of the audience would laugh at a joke that I couldn’t quite get, and yet Petzold -- the director behind the 2007 drama Yella, also featuring Hoss -- is such a master of tone and mood that I could feel the vibrations of the movie’s subtle humor, even if I’d be hard-pressed to articulate it. Barbara starts out slow and then moves even slower -- but by the end, somehow, it got me in its gentle clutches.