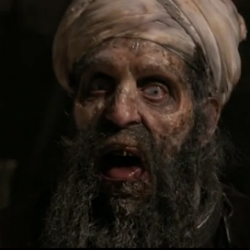 It was only a matter of time, really; we've got FDR fighting werewolves and Abe Lincoln staking vampires, why not resurrect Osama bin Laden from the dead so Western heroes can kill him off again? This time around it's a bunch of soldiers -- excuse me, hunky, apparently manscaped soldiers -- hunting the zombified bin Laden as he leads an army of flesh-eating terrorists towards a zombie apocalypse in Osombie. Yep, someone went there. Too soon?

Nah, who are we kidding -- I'm betting the world is ready to eat this stuff up. Also betting on that are director John Lyde and the makers of Osombie, who have put together a teaser reel of footage full of zombie decapitations and love scenes (of course!) to garner finishing funds for their indie production, which shot Utah for Afghanistan last fall. The synopsis of Osombie, as if you needed to know anything more:

The story follows Dusty, a yoga instructor from Colorado, who is on a desperate rescue mission to save her crazy brother Derek, a conspiracy theorist who is convinced Osama Bin Laden is still alive, despite having been buried at sea. In Afghanistan, Dusty falls in with a team of NATO Special Forces on a secret assignment. Turns out Derek is not so crazy after all, and that Osama has returned from his watery grave and is making an army of zombie terrorists. When the group crashes headlong into the growing zombie apocalypse, Dusty and the troops must find and destroy the root of the zombie insurgency before it infests the rest of the world.

More info on Osombie and its Kickstarter campaign here.

All in all, the Osama hook should give Osombie a bit more exposure than your average B-movie independent genre flick, but still expect it to fare best on DVD. Even so, it raises an interesting question: With other dramatic retellings of bin Laden's death in the works, are we ready to see the al-Quada leader come back to life in the movies -- at least, with comedy paving the way first?